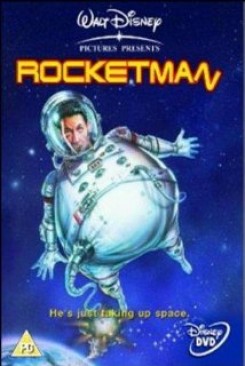 Rocket Man is a film about Fred, a computer nerd, who designed a new computer system for NASA. When a malfunction occurs, NASA contacts Fred to fix it. Days before the big launch to Mars, one of the astronauts, the computer expert, has an accident and they ask Fred to step in and take over for him. Fred, along with Ulysses, a chimpanzee, accompanies two seasoned astronauts to Mars.

There are several scenes where the chimp is seen performing basic behaviors such as, making faces, turning his lip inside out and kissing an actor. He is also seen sitting on a surface, or being carried or held by an actor, or climbing down from one point and traveling A to B to another. When Fred meets Ulysses, the chimp is sitting on a rock in a lab. Fred approaches the chimp and he bites Fred's finger. As a reaction to the bite, Fred pulls Ulysses off of the rock and starts slinging him around the room. Ulysses and Fred are seen falling down on the floor and then Fred is seen standing with the chimp in his arms. This scene was shot in several cuts. A fake and a real chimp were used. The real chimp is seen sitting on the rock supposedly biting Fred's finger and later, when Fred is seen holding the chimp. The fake chimp was used for all of the shots of Fred slinging the chimp around the room. When the chimp is seen biting Fred's finger, he is actually taking the trainer's finger into his mouth. In another scene, the group is on the space shuttle preparing to enter their sleeping chambers when, Ulysses gets down from his unit and walks over to Freds and gets inside. While Fred is telling the other astronauts good night, the door to his unit closes. The sleeping chamber is seen filling with a mist which initiates the sleeping mode for the next eight months. This scene was shot in cuts. The trainer used verbal and hand signals to cue the chimp from one chamber bed to another. When Fred is preparing their first meal in space, Ulysses lends a hand. Unfortunately, Ulysses mixes up the tubes and places medicine tubes with the food tubes. For this scene, the trainer placed the chimp on his mark and cued him with verbal and hand signals. There is a scene where Ulysses is suppose to be unconscious and Fred administers mouth to mouth resuscitation. The trainer put the chimp in a lay stay position and upon "action" he tells the chimp to do "big lips" and "give a kiss". The actor blew air into his own cheeks and then gave the chimp a kiss. When the chimp is seen in the wind storm, he is completely covered by his suit, gloves and a helmet which protects him from the dirt being blown by a fan.