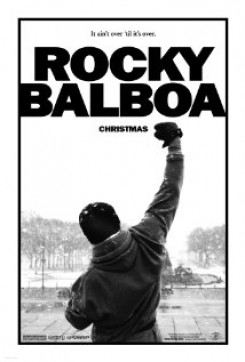 Itching for action years after his last title match, Rocky Balboa (Sylvester Stallone) decides to return to the world of boxing and takes on some small local fights. When the sports world begins speculating on how the living legend might fare against the current heavyweight champion of the world, Mason "The Line" Dixon (Antonio Tarver), Rocky agrees to participate in a much-anticipated exhibition match with his contemporary counterpart.

The two water turtles seen in Rocky's bedroom in an opening scene lived at the location, which was a ministry set up in a converted house in Philadelphia. Stallone gave the turtles the same food they are fed every day by employees of the ministry.

The sequence where Rocky visits a shelter to adopt a dog was filmed inside a real Los Angeles county animal shelter. The dogs normally housed in the section where filming took place were moved by the shelter's employees to a similar area of the facility. The section was then sanitized twice and the caged dogs seen in the movie were brought in by a trainer from Bob Dunn's Animal Services.

Rusty, a 10-year-old male terrier mix, played the role of Rocky's dog Punchy in this film. According to the Safety Rep monitoring the production, Stallone established a nice rapport with the dog after several weeks, so the actor controlled and cued Rusty during most takes. The dog was always leashed and supervised when they filmed outdoors, and trainers gave Rusty frequent breaks in a warm vehicle during filming of the training montages. Although American Humane monitored this dog action, we were not able to monitor all the animal action throughout filming.

On-the-job scenes with Paulie (Burt Young) were filmed at an actual slaughterhouse located in Pico Rivera, outside Los Angeles.