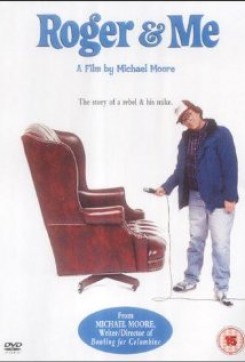 Director Michael Moore pursues GM CEO Roger Smith to confront him about the harm he did to Flint, Michigan with his massive downsizing.

A rabbit was killed and skinned during the making of this documentary, prompting AHA to issue a national press release protesting the film. The ongoing expansion of the AHA Guidelines for the Safe Use of Animals in Filmed Media has raised the standard of care for animal actors worldwide. In addition, technological advancements have created safe alternatives to risky action, enabling filmmakers to maintain their creative vision without compromising the welfare of animal actors. AHA continues to be a vigilant watchdog for animals in film and television and acknowledges the groundbreaking history of this program while expanding and refining procedures to reflect increased knowledge and new challenges.