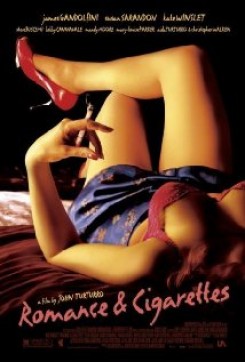 In this quirky blue collar musical, ironworker Nick Murder (James Gandolfini) must choose between his sexy, red-haired mistress Tula (Kate Winslet) and Kitty, his long suffering wife (Susan Sarandon). When the result of Nick's years of heavy smoking becomes abundantly clear, this philandering husband is forced to come to terms with the pain he has caused his family.

Nick brings home a St. Bernard puppy for his daughters and the growing pup reappears in various shots elsewhere in the film. Fanny, the first puppy used, was 14-weeks-old at the time of shooting. Gandolfini brought Fanny into the room and put her on the floor, letting her wander naturally around the kitchen and back to the trainer waiting out of frame. The actor handled and controlled the puppy during filming and the trainer held Fanny's leash while she rested between takes.

As Nick eats at the kitchen table, a mid-sized St. Bernard named Happy sits watching by his side. Trainers settled the dog in a sit-stay position and Happy's attention remained focused on Gandolfini and the tasty morsel he proffered.

Whether the script called for the dog to hang out with the girls in the living room or with Nick on the porch, trainers would walk the St. Bernard onto the set with a collar and leash and position him according to the director's wishes for each scene. General safety precautions included having the interior set enclosed; the trainer standing five feet from the dog off camera; and giving the dog water prior to each scene.

American Humane's Certified Animal Safety Representatives did not monitor the underwater scene with Tula in the lake nor the calf being chased down the street.