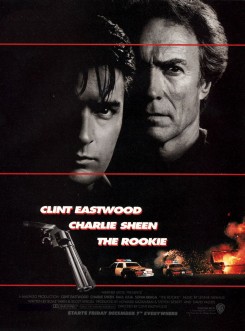 Just when Sgt. Pulovski and his partner are about to nab the car theft ring they have been tailing, all hell breaks loose and Pulovski's partner is killed, shot in the back by the ring's vicious kingpin. Pulovski vows to avenge the brutal murder and put the kingpin and his extensive chop shop operation out of business permanently. The grizzled Pulovski is not at all impressed with his new partner, Dave Ackerman, a rookie who is a maverick from a wealthy family. After some serious blunders the rookie becomes a seasoned pro and valued partner.

The Rookie is an action packed film with spectacular car chases, violence and rough language. There's a scene in a trashy bar where the patrons are betting on a dog fight. The dog fight was staged using one real dog and one fake dog. In another scene, Ackerman is chased by an aggressive junkyard dog. When the dog is viciously trying to get to Ackerman through a closed car window, the dog is really responding to a squeaker toy held by his trainer who is inside the car. When Ackerman returns to the seedy bar, he's attacked by a pit bull and in the fight he shoots and kills the dog. This scene was shot in cuts. Rather than attacking the actor, the dog was jumping into the actor's arms when called. Where the dog is shot and killed a fake dog was substituted.