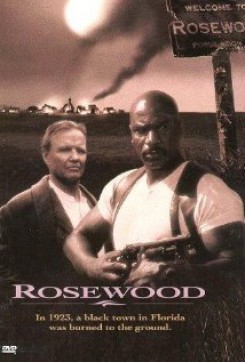 Rosewood is a true story about the three day massacre of Blacks in Rosewood Florida. Set in 1922, Rosewood a quite peaceful town with blacks and whites living in harmony until one day a married white woman who is having an affair is beaten by her white lover. In order to keep her husband from finding out about the affair, she runs into the street screaming that a "Niger" had beaten her. This immediately starts a chain reaction of beatings and killings of the local black men, women, and children in order to get to the truth. After the black area of the town is desecrated and burned to the ground, the truth finally comes out. However, it was to late to bring back the many innocent lives lost back to their families. The massacre only last three days, unfortunately it took the Florida House of Representatives 70 years to grant reparations to the families of Rosewood.

Animal action is throughout the film. Horses, mules and cows are seen hitched to hitching posts and to buckboards traveling from A to B. There are several scenes where horses are ridden from A to B in the town or in the woods. Goats, chickens, and other livestock are seen in pens or walking around in the background. All debris was removed from all areas where the horses were ridden and debris was cleared from the train track area. There is a scene where a man is seen galloping beside a train as another man is attempting to leap onto the horse from the train. After a smooth transfer from the train to the horse is accomplished, the two men ride off. Professional stunt-riders were used for this scene. In the town, there are many horses and mules seen as the men are drunk and start shooting into the air while they wait to go "Niger" hunting. One horse is seen rearing. During a chase scene, a man is shot and falls off of his horse. Quarter loads were used for all scenes involving gun fire around the animals. Only experienced stunt riders and trained rearing horses were used. There is a scene where a young boy is out hunting and a boar is seen looking for food among some roots. The boy's father instructs him to shoot the animal, however, the boy cannot and so his father shoots at the boar, hitting it on the top part of his back. The scene was shot in cuts. A fake and a real boar were used for this scene. A trained boar was used when the animal is seen looking for food. The trainer placed food on the ground to cue the boar. A fake boar was used when he is supposedly hit by the bullet.