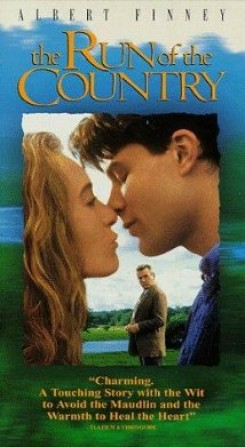 Run of the Country

Run of the Country is a film about Danny, a young Irish man trying to figure out what his life and future holds for him. He becomes very confused after his father, a police Captain, takes it for granted that he is going to take over the role of running the house after his mother dies. He does not like gardening, wearing an apron or plucking chickens for dinner while his friends are out experiencing life. After an argument with his father, Danny packs his meager belongings and goes to stay with his friend, Coco Ponti and his mother. Danny and Coco share many adventures together. When he tells Coco he wants to become a priest, they decide to go to church and try on the priests robes to see how it feels to Danny. While at the church a farmer comes for a blessing for his pregnant sow and insists that Danny bless the animal. While driving home Coco and Danny pass the man. His sow is on the ground, dead in front of a car. Coco and Danny also go to the cock fights. While there Danny meets Annaleigh. They become very close. When Anna becomes pregnant, Danny realizes they must make decisions about the baby. Anna doesn't want an abortion, so they decide Danny will quit college and will get married. Before they can share their news with Coco, however, he is killed in a farming accident. Shortly after the funeral, Anna miscarries and her family decides to send her away. This is a turning point in Danny's life. He realizes he must go on with his education. It is a dream he and his mother shared, so he decides to go to Dublin to complete his education.

When Danny and Coco go to the cock fights, farmers seen taking their roosters out of burlap bags and applying spikes to their feet. The cock fight was shot in cuts. The only action the animals were actually involved in is a scene where the roosters peck at each other. Then they were then immediately pulled away from each other. However, leather sheaths were attached to the bird's spikes at all times for added protection. When the boys are driving home after blessing the sow and see the sow dead in the road, a dead sow had been purchased. A local farmer's sow was used for the scene at the church. It was returned after the scene was shot. In one scene Danny is plucking a dead chicken for dinner. A dead chicken was purchased for this shot. Then in another scene, Danny and his father are in the garden and rats are seen running through the potatoes. The production company obtained rats from a lab and returned them after the scene was completed. In yet another scene a dead rat is seen on the floor at Coco's home. It was a rat killed earlier by a local farmer. Farm animals and a dog were also used as atmosphere in the background. They were all local animals with the farmers taking care of their own animals.