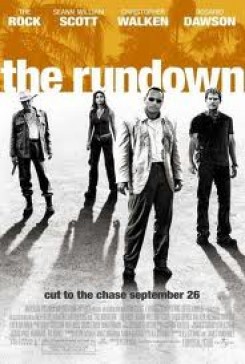 In this action/adventure/comedy, The Rock plays Beck, a bounty hunter that dreams of leaving his violent life behind and opening an upscale restaurant in the city. But before he can fire up the grill, he has to complete one last assignment – to kidnap his boss's wayward son, Travis (Seann William Scott) and bring him to his father. The only problem is that Travis has fled to the Amazon jungle, which is under the corrupt leadership of an eco-unfriendly Christopher Walken, and Beck must navigate through treacherous territory to capture his target.

Beck arrives in the Brazilian Jungle by way of a rickety airplane, which hastily lands in a deserted field populated by a herd of cattle. As the plane flies low over the herd, the cattle scatter to move out of the way. Later at the airfield, many of the same cows mill around. Although judging from the film, it appears that the plane was closer than 50 feet from the cows, minimum distance per American Humane Guidelines, the scene was filmed in Hawaii without AH Animal Safety Representatives present on set. Therefore, American Humane is unable to definitively verify the actual distance that the plane and camera helicopter were flown in relationship to the animals.

Beck and Travis wage war with the evil Hatcher (Walken) by orchestrating a cow stampede through the Brazilian town. Hundreds of cattle run through the village, knocking down buildings, jumping through windows, and running people down. One cow trips and falls while squeezing through a small opening. After the animal mayhem subsides, an intense gun battle begins between Beck and Hatcher's cronies. A truck explodes nearby. Soon, thick, black smoke infests the town, with the cows and chickens still milling about.

The cattle were driven down their path through the town with riders on horseback following, yelling and cracking whips (used only for the noise) to propel the cattle forward. American Humane enforced several safety precautions for this intense scene, including the addition of rubber mats to prevent slipping, requiring more distance between the animals and explosives, limiting the number of stampeding cattle, and reducing their speed. A cow that slipped going though the breakaway wall was checked by a veterinarian and found to be unharmed. Tragically, during another take of the stampede, one of the cows accidently tripped causing a second cow to fall over it. The second cow dug its horn into the ground, causing it to flip over and break its neck. The animal died instantly.

American Humane's mission is prevention and we take the welfare of animal actors seriously. When accidents occur, it troubles us greatly. Universal Studios has shown support for the standards outlined in the AH Guidelines for the Safe Use of Animals in Filmed Media and encourages a high level of cooperation between production staff and AH Safety Representatives. Unfortunately, even with precautions in place, accidents can happen. Due to the death of the cow, AH did not award a "No Animal Was Harmed™" end credit disclaimer for this film.

While traveling through the Amazon, Beck and Travis struggle to escape from pig snares as they hang precariously from trees. To make matters worse, they are suddenly surrounded by wild monkeys, which ferociously growl at them. One monkey jumps onto the hanging duo and starts to hump them in order to establish dominance. Beck and Travis struggle with the animal and it jumps to the ground and runs away.

Still in the wilderness of the jungle, Beck and Travis lay paralyzed on the ground after eating poison fruit. As they lay helpless, the two are again surrounded by monkeys, which growl at them. Fortunately, the animals lose interest and leave them alone. American Humane was not on set in Hawaii and cannot verify the treatment of the monkeys. Per the trainers, animatronic and stuffed monkeys were used in these scenes in addition to the live Howler monkeys.

A goat stands outside of the Amazon bar. The goat stood next to an actor, who held onto the animal's lead during the scene.

A guard holds up a black toad in front of Beck, presumably to frighten him. AH did not receive information on the toad in this scene.

Several horses and an enormous pig stand around in the town. Several horses were hobbled during certain scenes. Two pigs named Tig and Tank shared the role of the giant pig. Trainers placed the animals on their marks and retrieved them once filming was complete.

Hatcher locks down the mining town and many animals, including horses, chickens, and pigs, scatter to avoid the confused villagers. Trainers placed the animals in the background of the scene and scattered feed on the ground for the chickens and pigs.

AH is giving The Rundown the duel rating of Acceptable/Questionable.