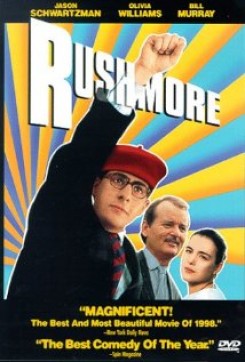 Rushmore is a coming of age story about an extraordinarily bright boy, Max Fisher, who has a hard time concentrating on his studies, but is involved in numerous extracurricular activities at Rushmore, an exclusive prep school for the wealthy. Max falls in love with a teacher at Rushmore, Miss Cross, and the bulk of the film focuses on the amazing antics that Max gets involved in, trying to get the attention of Miss Cross. To add to the confusion, Max befriends the father of two of his classmates, Mr. Blume, who also falls in love with Miss Cross.

There are two Jack Russel Terriers who are used throughout the film. They belong to the headmaster of Rushmore, Mr. Guggenheim and appear in numerous scenes with him. In the opening scene, the two Jack Russels are sitting in the school chapel next to Mr. Guggenheim listening to a speaker. The dogs were given a sit/stay command and were raised up on boxes. In the next scene, they are running across the lawn, following Mr. Guggenheim in front of the chapel. The dogs were released from the interior of the chapel by 2nd handler when the door was opened. They follow Dr. Guggenheim being prompted by food and a noise maker. They were then called to the first handler when the characters stop walking. They appear in a third scene, in Mr. Guggenheim's office, sitting and sleeping on the couch. To achieve this, the dogs were given a down stay command by the trainer. There are also quite a few fish used in this film. The first time we see Miss Cross' classroom, she is feeding fish in six large aquariums. She lets Max take a turn feeding them, and he drops the whole can of fish food into the tank. Max kneels down and looks into one of the fish tanks and sees one hundred little fish swimming around. All of the live fish used in this film were obtained from an aquarium company, and were returned to the company after filming. All fish were handled with a standard large dip net. We also see (some stock footage) of fish swimming in the ocean. In another scene, a man in a pet store is trying to catch some fish in a tank with a net. This was accomplished by putting a net in the tank, moving it back and forth in the tank, catching one fish in the net and releasing it seconds later, off camera. We then see Max show up at Miss Cross' classroom with two bags of fish. The fish were removed from a large aquarium and placed in two bags (six fish in each bag) with water from the aquarium. When Max adds them to the tank in the classroom, the fish were transferred from the plastic bags to a clear plastic container. The Jack Russells appear again in a school conference room with Mr. Guggenheim, sitting on a chair, and again in a final scene laying on the back of his chair. For these scenes, the dogs were placed in the chair, given a sit stay command. They were elevated on boxes. One of the dogs fell asleep. There were also a number of bees used in this film. As Max and his friend Mr. Blume go to war with one another over the affections of Miss Cross, they play a number of "tricks" on each other. At one point, Mr. Blume finds a bee in his hotel room. The camera pans to a small hole in the wall, where we see many bees crawling in and flying around the room. Professional bee wranglers handled the live bees and the images were enhanced with many prop bees. In one of the final scenes, we see Max and his friend Dirk flying kites outdoors in an empty parking lot. There are seagulls flying around in the background.