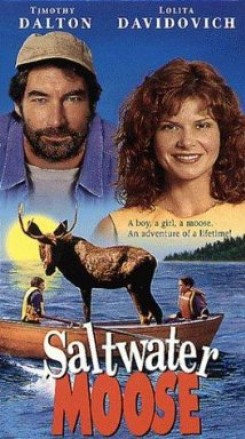 Salt Water Moose, a Canadian production, is a family film about two youngsters who decide to become matchmakers for a stranded moose. During one particularly frozen winter in Nova Scotia, a moose wandered across a frozen bay and ended up on a little island called Dead Man's Rock off the coast of a small village. After the spring thaw, the moose was stranded on the island with lots to eat, but no companionship. A local girl, Jo, befriends the moose, names him Bonnie Prince Charles and proceeds to mastermind a plan to bring him a moose princess. When a writer from Toronto decides to write a novel, she and her son, Bobby, go to spend the summer at her childhood home in Nova Scotia. The writer, Eva, is trying to recoup from her divorce, while Bobby tries to deal with the pain of being separated from his father. The small coastal town is a far cry from the life he knew in bustling Toronto and he feels out of place. He is befriended by Jo and her widower father, Lester. Soon we learn that Lester and Eva knew each other when they were growing up and are happy that their children have become friends. In introducing Bobby to the local area, Jo takes him on a boat ride to the island. As they walk the island, they encounter Bonnie Prince Charles in a pasture. Jo recounts the story of how he became stranded and her plan to find him a mate. She convinces Bobby to help her capture a female moose, build a raft to carry the moose across the bay and deliver her to Charlie. Lester teaches Bobby moose calls and soon a moose princess appears in the woods. They manage to enclose her in a forest area surrounded by fish netting, bringing her maple leaves to eat and binding her newly formed horns with a silk scarf. Eventually they are able to get her to walk up a ramp into a horse-drawn cart with high sides and lead her through town to the farm owned by Bobby's grandmother. They name her Beatrice and keep her in one of the corals on the farm. Then they proceed to build the raft that will take her to her prince. Lester is a boat builder and he and Jo design and build the raft with high protective sides, barrel pontoons and room for hay. Once this is complete, Jo and Bobby prepare to tow the raft out to the island. Although Lester and Eva are concerned parents, Lester trusts that Jo and Bobby can make the crossing. Unfortunately, they run aground on some rocks. An unseasonal storm front moves in and thrusts the children and Beatrice into further danger. Lester and Eva come to the rescue, but in an attempt to free Beatrice from the battered raft, Lester almost drowns. Eva jumps into the stormy sea to save him and Beatrice escapes the raft to swim on her own. The children are thrown overboard but manage to swim to shore. Although Jo is unconsolable, thinking that Beatrice is lost in the storm, the next morning brings sunshine to the island and a princess to Charlie.

Animal action is seen throughout the film and consists of four moose, a dog, and various background animals such as chickens, a seal, a porcupine, an eagle, a horse and a goat. The moose actors include a fully grown male, Charlie, a young moose portraying Beatrice and a cow with her calf in the final scene. The most daring scene in the film occurs when Jo and Bobby are caught in the storm and must release Beatrice to swim on her own. Lester and Eva take off into the storm to find their children and the moose princess. Lester jumps onto the moose raft that is rocking in the raging waters and tries to unfasten the gate to free Beatrice. He manages to open the gate, but is thrown from the raft and knocked out by a pontoon that hits him in the head. We see Beatrice jump off the raft into the stormy sea and swim off. As Eva dives in to save Lester, the two children are thrown overboard by the raging waves. Bobby swims out to save Jo and sees Beatrice swimming between them. He casts a line out to Jo and in so doing, it loops around the moose's neck. Beatrice begins to tow both of them toward the shore, but the line breaks and she swims off. Jo, Bobby, Eva and Lester make it to shore, believing that Beatrice is lost in the storm. For this extensive scene, both a real and an animatronic moose were used. When the moose is seen in the raft as it rocks in the ocean waters, an animatronic moose was used. After the moose jumps off the raft we see the legs of the moose under water, kicking as it swims. This was also an animatronic puppet. For the sequence where Beatrice dives off the raft and swims away, a controlled environment was used for filming. The scene was shot in a lake at the Tralee Veterinary Clinic where horses are trained to swim. This lake is unique in that the depth of the water can be regulated and for this scene was kept between three to five feet deep. The raft was actually tied to a dock and being shaken by hand with rain machines used to control the storm weather effect. Moose can naturally swim and dive, and this particular animal was prepped at the lake for a week prior to filming. Trainers were in the water with the animal and five vets were on staff. When the moose is seen towing the children, a special harness was made to do the towing and a loose rope was around the neck of the animal for effect. In the scenes where we first see Beatrice in the woods eating and then riding in a horse drawn cart, the moose was filmed in its natural habitat at Shubenacadie Wildlife Park where it was raised. The moose playing the princess is actually a one year old male and is naturally gangly. Trainers worked with the moose for three months prior to filming and used voice and hand commands. The scarf placed on the moose's head was a charming headdress for the princess, but actually served to cover the "nubs" or newly forming horns of the young male. Both a real and an animatronic moose were used in the cart. When the real moose was in the moving wagon, an experienced trainer was out of camera range, behind the wagon, doing the actual driving. The children merely appeared to be leading the wagon. In one scene, Beatrice is seen with a playful goat in a coral at Bobby's grandmother's farm and later escaping from the coral. She is herded back to the coral by the children in the community and seen trotting down the center of the road surrounded by two boys on bikes and followed by a pick up truck.. The goat was raised with the moose and written into the script so that the moose would have his constant companion during filming. When we see the moose appear to open the coral gate, the latch was rigged with a carrot and actually pulled open by an unseen line controlled from out of camera range. When the moose is seen trotting down the road, it was in reality following his trainer. A trainer was also in the truck behind the moose. The other scenes in which we see moose are very mild. Charlie and Beatrice are seen grazing in a pasture, both alone and together, and seen also with a baby moose at the end of the film. All these scenes were filmed in the wildlife park. Other animals such as a seal swimming, an eagle in a tree and a porcupine up a tree were also filmed at the wildlife park in their natural habitat. Jo has a pet dog in the film and it is in several scenes either sitting or walking with her. Background atmosphere included a horse in a coral and some chickens both in the farmyard and in the hayloft. This Canadian film was shot in Canada by a Canadian company. American Humane was not on the set. However, after conferring with the trainer and the production company, we are rating Salt Water Moose " Acceptable."