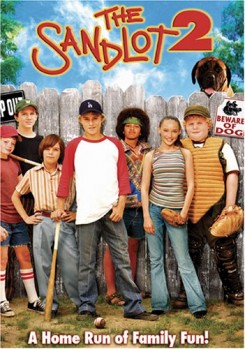 This sequel focuses on a group of boys who reluctantly allow three girls to join their baseball team to help them beat their rivals. When one of the girl's father's model space-ship falls on the other side of Mr. Mertle's fence, they devise different ways of getting it back. Central themes include friendship and overcoming fear of "the beast" that lives on the other side of the yard.

In one scene, the kids place Haley's cat Susan B. in a harness attached to a pulley that travels over the fence directly into enemy territory. The mastiff named Goliath and Susan B. face off and, following an off-screen attack, fur flies up and the cat returns as bald as a broiler chicken.

Trainers placed the mixed-breed cat named Peeps in a special harness attached to a pulley/cable system. Two trainers hid nearby while a stunt coordinator operated the pulley. To make Peeps do a very slow turn while suspended, one of the trainers gave the cat a gentle nudge. This same action was reversed when trainers used a Sphinx breed for the after-shot of the hairless cat.

While the camera angle makes it look like the two animals are nose to nose, they were actually about three feet apart. The trainer rattled a toy parrot that Peeps dislikes to elicit the hiss.

In one scene, David squares off with Goliath and covers the dog's face with a red cape. The dog breaks free from his chain and leaps over a wall to chase after the boy on his bike. After luring Goliath into the Construction Supply Yard, David tries to elude the dog by jumping over a chain-link fence, but the daredevil dog quickly follows suit

In this sequence, the camera was sped up to make it look like the dog ran quite fast. To get the mastiff to follow, one trainer ran ahead of the dog using verbal cues and the lure of treats.

When Goliath leapt over the fence, this was actually an insert shot of the dog jumping from a 3 ½-foot platform and close-ups of his feet upon landing. The platform was well-anchored and covered in non-skid mats. Trainers kept the jumping height low to avoid straining the dog's shoulders.

The animal action climaxes when Goliath nearly catches up with David in the sandlot and grabs a swatch of his cape. A misstep leaves David buried in the sand, but the long-feared mastiff digs the boy out and drags him to safety.

Trainers cued the dog as he ran from point A to B with a swatch of the cape in his mouth. Production had pre-sited the dirt, and trainers cued Goliath to dig and back out of the ditch. The young actor actually wore a harness with a winch that crew members used to pull him from the hole. This was later erased by special effects to make it look like the dog did all the work.

A flashback to an earlier time shows a massive dog chasing a boy through the lumberyard. The child eventually throws his lunchbox at the dog to keep it at bay.

This action was done in several cuts. Trainers instructed the dog to run from A to B, stand, and bark on cue. The street was completely locked down to all traffic and no dog was actually present when the lunch box was thrown.