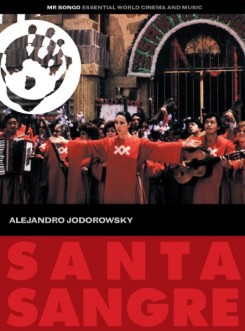 Filmed on location in Mexico, this excessively grotesque film is a freak show, both literally and figuratively. Santa Sangre (which means Holy Blood) is saturated with sadism, carnage, religious mania, mamings and freaks. A young boy is committed to an insane asylum as a result of his horrid childhood in a circus. The boy witnessed his mother pour acid on his father's groin after she caught him copulating with the tattooed lady. Dad, a knife thrower, seeks his revenge by hacking off Mom's arms. After the young man's release from the institution, he and his mom team in a bizarre act on the freak show circuit. She is his mind, he is her arms and he slices up every woman he comes in contact with.

In one of the circus scenes an elephant is dying and blood pours from it's trunk. The scene was staged with the elephant lying on his side. The elephant drank a pleasant flavored thick liquid and expelled some through his trunk. In a later scene, scavengers break into the elephant's coffin and dismember the elephant. The dismembered parts were fake props. When chickens peck at a bloody arm, they are picking at feed placed on a prop. Dogs lap up gravy-flavored stage blood. A variety of other animals are seen briefly such as a snake, bird, puppy, horse, and pigeons. There is a scene involving many chickens where the chickens are dropping from the ceiling falling on the floor below. We have been unable to get any details on this scene, and because of the obvious potential for injury to the chickens, we are rating Santa Sangre "Questionable".