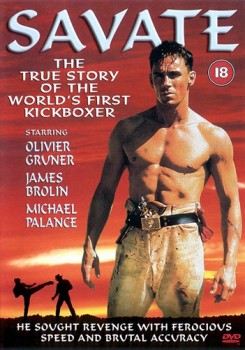 This is the story of the introduction of the French Kick Boxing skill, Savate, to the American West. A Frenchman named Chalemont is near death after being exposed to the harsh desert elements. He is rescued by Cain and Mary, two settlers, who are brother and sister. Once Chalemont has recovered from his exposure, he is able to come to the aide of the settlers in this small town. It seems that the settlers in this area are being brutally burned out of their homes and threatened by a greedy hoodlum, Mr. Bennidict, and his men. Bennidict proceeds with his threats, as he knows the railroad is coming through this territory and wants control of all the land for himself. So that Charlemont can attempt to help the setters in their endeavor to save their own land, a "Tough-Man Tournament" is arranged to take place between Charlemont and one of Beneidict's men. Everything rests on Chlaremont's shoulders and it is now up to him to save the entire town. By Charlemont winning this tournament, Bennidict will be forced to return the land deeds to their rightful owners.

In this western setting, numerous horses are seen, either with carriages or being ridden. In the opening scene, shooting from horseback, a horse is shot and mortally wounded. Charlemont is forced to shoot and kill the horse. This scene was shot in cuts.

In another scene, horses are seen running out of a corral that has been set on fire by Benidict's men. Charlemount runs into the barn and carries one little sheep out of the smoking structure to safety.

A puppy is also seen in two shots lying on the porch. In both instances, the pup was simply placed there by his trainer and followed verbal commands to stay.