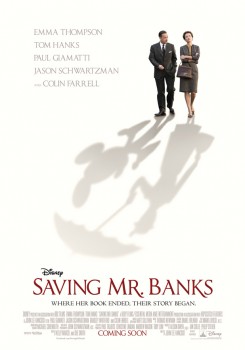 The true story of author P.L. Travers as he reflects on his difficult childhood while adapting his novel, Mary Poppins, for Walt Disney.

Throughout the film, the main character and his family have a pet dog, who is seen performing such mild action as sitting/lying, being held or petted, and walking/running on or off leash. For all of these scenes, trainers used hand signals and verbal commands to cue the mild action, which the trained dog was accustomed to performing.

The actor riding the horse throughout the film was skilled at riding, mounting and dismounting. All running/galloping scenes were well choreographed, and actors used caution while on and near animals.  When teams of horses pulled wagons or carriages, the drivers were experienced and teams of horses were familiar with each other and accustomed to the pulling action.

In the scene where we see chickens in the background, wranglers placed chickens in a pen and gave them some seed to eat to keep them in place.

In the scene where the actress is hanging clothes on a line in the backyard and a chicken roams the area and the actresses chases it, the trainers released two chickens and the actors simulated chasing the chickens. Wranglers off-camera made sure to keep the chickens in the frame using nets.

In the scene where the actors walk through a fair and we see various animals in the background, including sheep, bull, chickens, a kangaroo and a camel, there were sufficient number of handlers who brought the animals to set. Animals were kept in shade and provided water and food throughout the scene.

In the scene where a little girl rides a horse searching for her mother at night, find her mother, they shout at each other and the mother mounts the same horse and they ride off together, prior to filming the scene trainers taught actresses how to mount and dismount the horse. After they ride out of the frame, a trainer stops and helped them dismount.