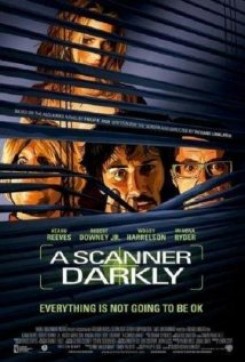 Based on the 1977 novel by Philip K. Dick, A Scanner Darkly is set seven years in the future in Orange County, Calif. As part of the government's failing war on drugs, undercover agent Bob Arctor, aka Fred (Keanu Reeves), uses a "scramble suit" that constantly alters the wearer's physical characteristics to avoid detection. Part of his cover includes consuming the popular drug, Substance D, which provokes a paranoid descent into the absurd. This film uses live action photography overlaid with an advanced animation process called interpolated rotoscoping to create a distinctive visual style.

Charles Freck (Rory Cochrane) has paranoid delusions about aphids exuding from all over his body. Concerned, Freck also examines his border collie, Millie, for signs of the bugs. When he finds aphids on her, Freck gives Millie a scrub down in the bath tub.

The trainer placed Millie on the bed and cued her to lie down and stay during the initial action in this scene. This dog loves water and had been prepped for the shower scene for weeks prior to shoot. After placing the dog in the shower/tub enclosure with its pre-adjusted water temperature, Cochrane stepped into the tub and made scrubbing motions with his hands and a bar of fake soap. Bath mats on the tub floor prevented any slippage. All aphids were animated in the post production process—no live insects were used.

When Bob, Ernie (Woody Harrelson) and Jim (Robert Downey Jr.) come home from their failed road trip, two cats scurry out of the way as they open the front door. One cat jumps on the hall table and moves away when Ernie grabs the bow-and-arrow set. These cats can also be seen in some shots taken by the secret monitors installed at Bob's house.

The safety precautions for these natural shots included having the area enclosed and all doors secured and covered by crew members. Though the set dressing made the room look messy, there was no hazardous rubbish that could injure the animals. During filming, the cats were allowed to meander about as their handlers and the Certified Safety Rep looked on.