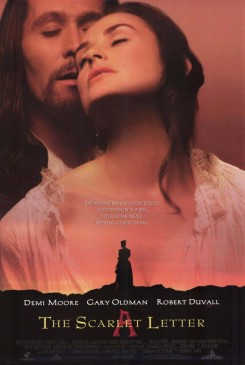 The Scarlet Letter is a film based on the classic novel by Nathaniel Hawthorne. The story is about the adulterous love between two early Puritans, Hester Prynne, a beautiful free-spirited woman, and her lover, Reverend Dimmsdale, the charismatic religious leader. When she refuses to name the father of her child, she is shunned by the community and forced to wear a red letter "A" on her bodice as a symbol of her sinful act. In the movie version Hester's husband, whom she presumed dead, returns seeking revenge. However, he dies, and she along with Dimmsdale ride off into the sunset together with their daughter. Hester arrives in town with a group of settlers by boat from England. She has come ahead of her husband to prepare their home for his arrival. The local dignitaries immediately take offense to her traveling alone and are even more shocked when she informs them that she will be living alone until her husband arrives. Hester stays to herself with her new servant, Mituba. One day as Hester drives her cart into town for Sabbath services a wheel falls into a muddy hole. She is trying to get it to budge when a stranger rides up behind her, introducing himself as Arthur, and offers to help. When Arthur is unable to pry it from the mud, he gives her his horse and he rides the horse who had been hitched to the cart. They both gallop into town parting as they go in opposite directions. When Hester arrives at the services, Reverend Stonehall tells everyone that the Reverend Dimmsdale is going to give the service. As Hester looks up she is surprised to see the very man who just rescued her in the woods. After the sermon, everyone retires to the Stonehall home for a picnic and Hester is formally introduced to Reverend Arthur Dimmsdale. They both feel the attraction between them but when Arthur finds out she is married he try's to dismiss his feelings. He soon realizes that it is not going to be that easy. In the following months, every time they run into each other the same feelings are always there no matter how hard they both try to deny them. In the meantime, Hester's husband's boat has been attacked by Indians and everyone is presumed dead. Arthur brings Hester a wig found at the site of the attack with the name tag "Pyrnne, Roger R." When Arthur suggests he leave to let her mourn, she says "No" as she pulls him into her arms. There is no turning back now for either one as they consummate their love for eternity.

In the scene when Hester is riding into town for Sabbath services and the wheel of her wagon is caught in the mud, the horse attempts to rear as Hester begs him to go forward while pushing on the wagon. She turns to look behind her as she hears Arthur coming through the woods. He also attempts to push the wheel out, while yelling to the horse to move forward. Hester's husband Roger was not killed in the attack on his boat but taken prisoner by the Indians. When Roger is captured, he participates in the Indian ritual of picking up the carcass of a gutted deer, putting it on his head and dancing around in a circle as the blood drips down his head on to his chest. To accomplish this scene a taxidermic deer was used along with prop blood. The town is attacked by Indians and some people get into a cart trying to get away. The horses get spooked and the cart overturns. This scene was filmed in cuts. The cart and horse are seen running through town. Then the camera cuts to a shot of just the wagon as it starts to turn over. When we see the wagon on the ground, the horses are not there. For this scene, a single horse cart with a release mechanism on the harness was used. When the cart hits the hole, the wrangler triggered the mechanism which released the horse. When Hester first arrives at her new home she sees a red bird outside, sitting and flying around. In another scene, we see it fly into the cottage when Matuba is taking a bath in Hester's sitting room. The little bird sits on the window ledge inside chirping at the girl. Matuba later picks the bird up, opens the window and lets the bird fly away. There are many scenes of people riding horses, wagons, and carts throughout the town. Many times we see Hester driving her cart to and from town or riding her horse. The same is true with Arthur as he frequently visits Hester at her cottage. In an earlier seen in the film we see a large moose standing in the woods as an Indian is running with a torch in his hand towards an ancient burial ground. In another scene when Hester is walking through the woods and comes upon a stream, she sees two otters swimming around each other. Throughout the film horses, cows, sheep, dogs, moose, chickens and many other farm animals are seen being used for background atmosphere. These animals were owned by the local people living in the area.