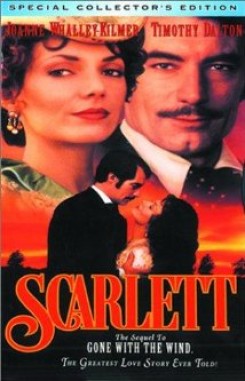 Scarlett is the continuing saga of Scarlett O'Hara, and her selfish schemes to reunite herself with her husband, Rhett Butler.

There is a scene where two horses and a carriage are seen galloping through town. One of the horses looks as if it collides with another carriage. This scene was shot in several cuts and camera angles to give the illusion of the horse and carriage colliding with one another. The actual driving of the carriage was done by experienced wranglers and the carriage only traveled a short distance to obtain the establishing shot. Other animal action consists of horses being ridden throughout the movie, a dog in several scenes at a house lying on the floor and dancing with a little girl. The trainer placed the dog on his mark and used verbal and hand signals to cue him. There are also some cows seen in the background and a horse show set in Ireland. All horses seen in the film are trained riding, rearing, and jumping horses and were supervised by an experienced stunt coordinator. The same coordinator accompanied the production to England and Ireland to supervise the horses used in those countries. American Humane was represented by the John Ancrum Humane Society for all animal action scenes in the United States. We are rating Scarlett "Acceptable". The film was also filmed in England and Ireland.