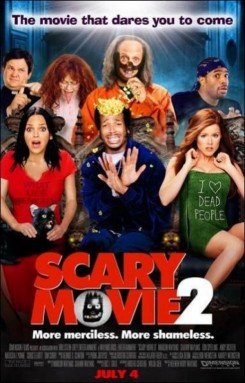 Twenty years ago an exorcism was performed in the Old Kane Manor. Today, Professor Oldman tricks his class into going to the house to awaken some old spirits he is certain are still hanging around resisting banishment.

Cat Action: Real Or Anamatronic? The part of Mr. Kittles, a black cat, was played by two different cats, Warlock and Elvis. Three trainers and a veterinarian were on the set at all times. Both cats were introduced to the actors ahead of time so they felt comfortable by the time the cameras rolled. The cats were alternated during the shoot so that no one cat became tired. Comfortable cages housed the cats while away from the set. One trainer would release the cat while another trainer stood off camera using hand signals to get the cat to achieve the required action.

A real cat was used for some of the action during the fight sequence with the character named Cindy. A series of wooden stands and pedestals were built at different heights and secured with sandbags enabling the cat to jump from various heights. One trainer stood in front of the bed and put some food on his shoulder. Using a verbal cue, the cat jumped from the platform to the trainer’s shoulder and they both fell back gently onto the bed. The trainer put a cat on its mark and stood behind the cameraman using a combination of verbal cues and hand signals to get the cat to snarl, growl and look mean. In post-production, these scenes were edited in with the scenes using an anamatronic cat and the fight sequence looked like Mr. Kittles was a fierce opponent! The cat that flies the plane and bombs Cindy at the end of the film was also anamatronic.

Bird Action: There are two scenes where a parrot appears in a cage, sitting on a perch, talking. Two trainers were on the set as well as a veterinarian. One trainer placed the parrot on a perch inside a cage. The bird sat on the perch as the trainer stood behind the cameraman holding up a treat to get the bird to look in various directions. The dialogue was added later, in post-production. Another bird appears in the film in costume standing on a counter and talking. The trainer dressed the bird and put it on a mark and retrieved it afterward filming.

Flies: In the beginning of the film as we meet a character named Father McFeely, who has dead flies covering his face as well as the window screen. The production provided receipts for the prop flies and spent many hours gluing them into place. The live flies that appear flying around were actually computer generated.

Doves: During a wheelchair fight sequence we see some doves fly by. Two trainers were present. One trainer had the birds in a release box and on cue, opened the box. The doves flew out of the box and toward the other trainer who stood on the opposite side of the set waiting with a catch box. The awaiting trainer waved a cloth and whistled as he held open the catch box. The approaching doves flew right inside.

Cow The cow that is seen flying in the air was not real. It is a spoof inspired by a scene in the film Twister."