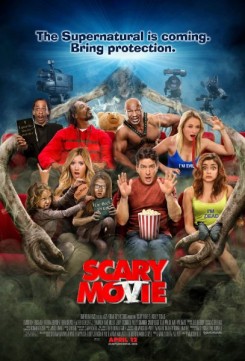 The fifth hilarious entry into the series that spoofs horror films.

In the scene where a mini-horse climbs into the bed with the actors, production first had the mini-horse prep getting in and out of a prop bed prior to shooting. On the day of shooting itself, production sets up a wooden ramp leading up to the constructed bed. On action, a little person leads the mini-horse up the ramp and “into” the bed (there is not a comforter on the bed, just a void at floor level (1 step up and 1 step down). They repeat action, this time the little person leads mini-horse out of bed.

Throughout the film, the main characters have a dog seen performing such mild action as sitting/standing/lying, being petted, and walking/running on or off leash. For all of these scenes, trainers used hand signals and verbal commands to cue the mild action, which the trained dog was accustomed to performing. The barking/growling was also a trained behavior.

When the actress rips the head off a chicken, production used an animatronic chicken.

In the scene where the dog is sleeping in the crib with the baby, production constructed an enlarged crib. After placing the dog in the crib, they placed the baby next to him and got the shot. The dog and baby were acquainted with each other prior to shooting.

In the scene where the dog lays outside the bathroom, licking himself, then we see a toothbrush in his rear end, the trainer placed a toothbrush near the dog’s rear end (not inside of it). When cued the dog pulled the brush out from under him.

In the scene where the dog licks the hose of a vacuum cleaner near the pool, trainers brought the dog to the set and laid him down next to the pool. The trainer then smeared peanut butter on the inside of the hose and showed it to the dog. The dog licked the peanut butter for several shots.

In the scene where the dog jumps into a lounge chair with a cord in its mouth, trainers placed the cord on the chaise lounge. The trainer was placed behind the actors and cued the dog on action. The dog immediately jumped up on the lounge chair and picked up the cord and chewed it. The cord was a fake.

The video of the cat licking a lollipop was taken from stock footage.

The animal heads in the cellar were taxidermy. Production provided receipts for those taxidermy.

The flies swarming over the pie were fake.

The videos of the animals running was taken from stock footage.