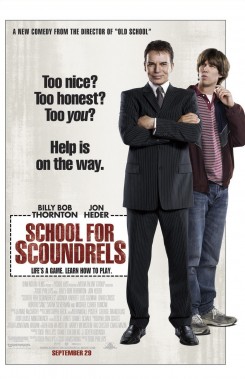 A young guy short on luck, enrolls in a class to build confidence to help win over the girl of his dreams, which becomes complicated when his teacher has the same agenda.

During his date with Amanda, Roger takes live lobsters from a tank in the restaurant’s kitchen in order to liberate them from becoming someone’s dinner. In the next shot, the couple is at the East River and Roger throws two lobsters -- one by one -- into the water, encouraging them to swim to Maine.
Trainers educated the actors on how to safely and properly handle live lobsters. The two lobsters that Roger tosses into the river were either rubber props, or store-bought cooked crustaceans with their shells painted brown, depending on the take. Though not clear on screen, in one shot, Amanda snips off the rubber bands restraining a live lobster and then tosses the lobster into a large net below frame held by three divers standing in the water. These lobsters were native to the Hudson River but purchased as food products from a store. According to the Safety Rep monitoring the film, the production company and animal handler went to extraordinary measures to give all 75 lobsters on call for this performance the greatest chance for survival by releasing them directly into the high saline waters of New York Harbor.
When Amanda’s apartment has been vandalized, even her Great Dane Dewie does not escape unscathed; the dog has a crude expression spray painted on its side. Trainers created this mark with neon red Streaks 'N Tips, a temporary colored hair spray, and it was cleaned off with soap and water after filming. The dog was released and called to a mark by two trainers, one of whom used a bait stick to maintain the Great Dane’s eye line for the shot.
Cats rule at Lonnie Radcliff’s (Ben Stiller) house; they appear everywhere lounging on the stairs and on bundles of newspapers, and seated or laying all over the sofa, chairs and other furniture. Trainers brought in 40 cats for these scenes, and up to 17 of them were used at one time. To keep things orderly and controlled, nine trainers were present on the set during filming. For the shot of the cats in the stairway area, trainers placed seven cats tied with waist ties to newspaper bundles or eyehooks in the floor. The gray cat that runs on the stairs was released by one trainer and called to its crate by a second handler.
For the subsequent scene, trainers put 12 cats on waist ties in various places around the room. Five cats were released to walk around freely as Roger and Lonnie conversed. Crew members were instructed to stay put after cut until all loose cats were collected and crated.
Extras appear with dogs in the background of several scenes: at the park; when Bee Bee (DeRay Davis) and Lawrence (Omar Dorsey) accost Roger while he tickets their car; in the lobby of an apartment building; and when Roger confronts thugs to get his sneakers back. In every instance, these dogs were leashed at all times and well-controlled by the background extras.