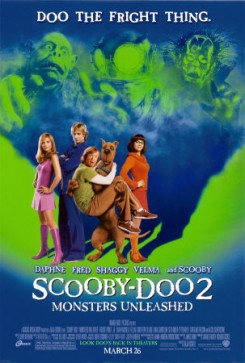 Mystery Inc. must save Coolsville from an attack of past unmasked monsters brought to life by an evil masked figure trying to "unmask" the gang.

Scooby’s Friends and Foes: At the grand opening of the Coolsonian Criminology Museum, myriad fans greet the gang as soon as they hit the red carpet. Three canine groupies sit on the steps and bark their admiration for the Scoobster, who graciously thanks his fans. To achieve this action, a trainer placed the bull dog, Pomeranian, and retriever on their marks and then stood off-camera cuing them to bark.
A showdown in Old Tyme Mining Town pits Fred (Prinze Jr.) against the Black Knight Ghost, who glows ominously from atop a black horse also decked out in armored garb. Fred jumps on a motorcycle and the camera focuses on the horse’s leg as it paws the ground, itching for a fight. It would seem the options package for Indian motorcycles has greatly expanded, because for some inexplicable reason, this bike comes equipped with a jousting device right on the handlebars. With lances at the ready, the knight gallops up quickly and passes Fred on the bike. The horse turns and stops, then the jousting match continues as the knight and Fred careen toward each other and both get tossed off their respective rides, leaving the horse to trot off into the moonlight.
Though this jousting sequence looks dangerous, the production went to great lengths to achieve the action safely. A Friesian horse named Marcus portrayed the Black Knight’s mount, and the American Humane safety representative on set found him to be gentle, attentive and well prepped to work with the motorcycle.
Marcus’ stunt rider Cody used his knees and reins to cue the horse to step forward and paw at the ground several times to give the impression of a fidgety animal. A stuntman placed the motorcycle in position approximately 60 feet away from Cody and Marcus and then switched off the motor, leaving the headlights on. While it looked like the horse and rider brushed the bike as they galloped past, the distance between the two opponents was actually about 15 feet.
For the second pass, the horse and motorcycle moved toward each other on a pre-planned course with six feet of space between them. As the riders crossed paths, they jerked back the shoulder closest to their opponent to make it look as though the challenger’s weapon made contact. Both stunt riders had cables harnessed to their costumes to orchestrate the fall from their mounts. The slow-moving motorcycle was rigged to fall away from the horse, who continued to canter directly to a trainer beckoning him from off screen.
Marcus had frequent breaks between galloping scenes, and his wranglers groomed the grounds regularly to remove any debris that could jeopardize the horse’s footing. The Black Knight Ghost’s costume was made of lightweight plastic painted gunmetal that caused no discomfort for the animal. The props department created special lances made of balsa wood and used painted cardboard to replicate Fred’s rusty pipe. Computer-generated imagery (CGI) applied in post production made the lances and pipe appear much longer and more menacing on screen, and the green mist emanating from the ghost and his mount was also a special effect added in later.
Although he never appears in the film, the production frequently used a Vizsla/Doberman mix named Pluto for plate shots, to analyze his fur movement, and as a marking reference for the animated dog.