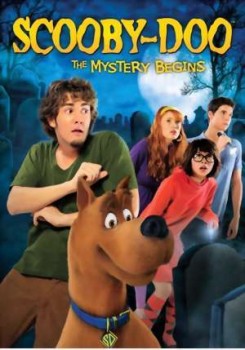 This is the story of how the mystery-loving teens and their dog first met each other to become a crime-solving team.

Dogs are seen in cages on Pet Adoption Day. Several dogs are in the same cage and one barks and paws at the cage. The puppies and kittens that shared cages were from the same litter and enjoyed being together. All other animals were placed in separate cages, which were inspected for safety before filming and filled with blankets and water dishes. Cast and crew were instructed not to touch the animals, and costumed trainers walked around during the scene just to keep an eye on the animals.
Scooby-Doo is not real in this film. Spiders: The gang walks by a bunch of spiders on a web, then Daphne (Kate Melton) sees a tarantula on her shoulder and brushes it off. This scene was filmed in separate shots. First, several fake spiders were placed in webs and around the set. A few live orb-weaving spiders were also placed in a prop web moments before filming and allowed to do whatever came naturally (which was mostly just sitting there), and they were retrieved right after. A trainer placed a tarantula on the actress’ shoulder right before that portion of the scene and crouched a few inches below the spider as a precaution in case it fell (which it did not). The actress was instructed on how to pantomime brushing the spider off, and since spiders are sometimes startled by blown air, the actress made sure not to blow out or scream when she reacted to the spider. She did not actually brush the spider off -- the trainer gently removed it. Post-production editing made it look like she brushed it off.
Other Animals: Production provided documentation that the bear-skin rug was a prop. The bats in the film were all computer-generated.
Due to late notification or limited resources, American Humane did not monitor some of the dog action or any of the snake action."