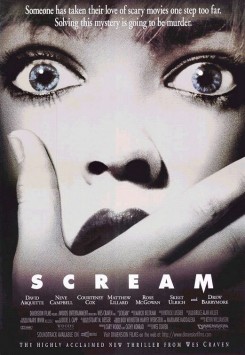 Scream is a film about a psychotic killer who stalks high school students. His first victims are Casey and her boyfriend Steve. This is just the beginning of the bizarre killings as the psychopath targets his next victim, Sydney, a young girl whose mother died the year before after being raped and brutally stabbed. After Sydney escapes the killer's clutches, the police feel they have a concrete suspect however, they could not be more wrong.

A cat is seen running a short distance across a garage floor and out through a doggy door. Trainer one released the cat while trainer #2 waited on the opposite side of the door and cued the cat with a buzzer and treats.