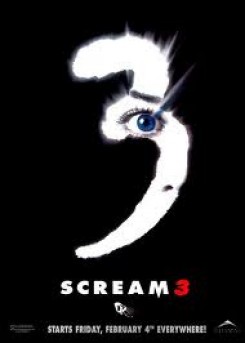 Scream 3 is the third installment in the horror series that began with Scream. In Scream 2, killings spiced up the filming of the movie within a movie titled Stab 2. This time the killing spree happening in Scream 3 is on the set of the movie within a movie, Stab 3. The perpetual victim in the "Scream" series is Sidney who this time is in hiding. Although she is protected behind security systems, she is still stalked by yet another masked killer. The creature within this feature is a dog.

The animal action is very mild in Scream 3 where the danger seems to be directed at the human characters. The third installment shows Sidney in several scenes accompanied by her pet dog, Cherokee. Two Golden Retrievers named Cosmos and Solar were used to play Cherokee. Trainers cued the dogs to go with the actress, lay down, play ball and drink from a water bowl.

In one scene, Sidney is at home with Cherokee when a window shatters. The scene was shot in cuts and the dog was not present when the window breaking was filmed.