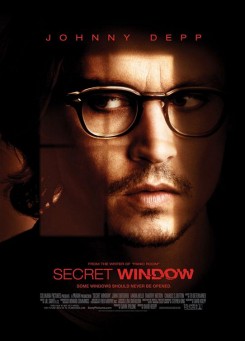 A writer is accused for plagiarism by a strange man, who then starts haunting him for "justice."

This film includes a morbid depiction of violence against an animal as well as mild action involving a mouse and a squirrel. “Secret Window” was filmed outside the United States and American Humane could not communicate with the animal trainer because he did not speak English. However, the production did provide documentation for the fake dog used as Mort’s murdered pet, Chico.
Detailed Animal Action
At his remote cabin in the woods, Mort has only a mixed breed dog named Chico for company. While the author sleeps on the sofa or works on his latest literary project, Chico lounges in his doggy bed, or sprawls on the floor or on a worn arm chair.
In a grisly scene, Mort discovers Chico lying motionless under a sheet on the front porch. John Shooter (Turturro) has apparently stabbed the dog through the throat with a screwdriver as a warning not to involve the authorities with their “artistic” dispute.
Strange noises seem to echo in the rambling cabin one night, and Mort’s dealings with Shooter have made him as taut as a piano wire as he searches top to bottom for signs of an intruder. Armed with a row boat oar, Mort bursts into the bathroom and shatters the shower door when he hears something shuffle inside. It turns out the trespasser in the tub is a little squeaking mouse, which he places in a cloth sack and frees outside in the garden.
When Mort discovers the dead bodies of his neighbor Tom and his lawyer-cum-private investigator, played by Charles Dutton, he notices a squirrel sitting high on a tree branch nearby.