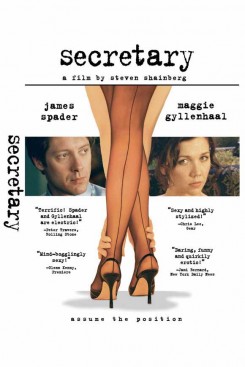 A young woman, Lee (Maggie Gyllenhaal), recently released from a mental hospital, lands a job as a secretary to a lawyer, Edward (James Spader). The troubled woman soon finds that her relationship with her boss is less employer/employee and more master/servant.

Although AHA was on set to monitor one scene featuring a monkey, production did not answer AHA's inquiries regarding the other animal action featured in the film. As a result, AHA is awarding the film a dual rating: Acceptable/Unknown.

A small dog lies in a dog bed.

Edward sets a no-kill mousetrap onto the ground. The trap opens up and a small white mouse crawls out.

As Lee and Ed walk into an office, the camera shows us a close up of a small squirrel monkey. A trainer placed the animal on its mark and cued it to "stay" from off-camera.

Lee takes a dead cockroach from the pocket of her shirt and drops it onto the freshly made bed.