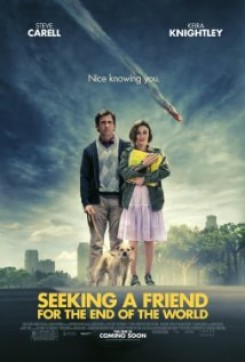 Seeking a Friend for the End of the World

While an asteroid nears Earth’s atmosphere, a man decides to take a road trip to see his old high school sweetheart.

Throughout the film, the main character has a pet dog, seen performing such mild action as sitting/standing/lying, being held/carried, and walking on or off leash, dog sitting in a car. For all of these scenes, trainers used hand signals and verbal commands to cue the mild action, which the trained dog was accustomed to performing.

For the scene where the dog is eating spinach dip from a bread bowl, the bread bowl was filled with food that was deemed safe for consumption, and takes were limited to prevent overeating. In the scene where couple smokes a joint in car with the dog, they were actually smoking an herbal cigarette. In the scene where the cop hands the dog through his office window, to a car outside of it, a trainer held the dog and passed it to another trainer who stood off screen on the other side.

Whenever the dog is seen riding in the car, trainers placed the animal on its mark on the car’s front or backseat and cued it to stay. The car was on a processor truck, meaning the car never actually moved, only the truck it was riding on moved.

In the scene where a brick is thrown through actor’s window, a foam brick was used to break the window which was made out of candy glass (made out of sugar, breaks more easily).

In the scene where actor carries the dog down a fire escape and climbs through a window, a special harness rig was used. The trainer secured the dog into the specially made harness and attached it to the actor who was also wearing a special harness for this scene. Trainers stood off screen to ensure safety and supervise the scene.

In the scene with the spider crawling on actor’s face, the trainer placed the arachnid on his neck and allowed it to do whatever came naturally. It was retrieved after filming the scene.