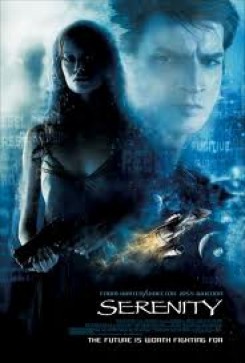 The crew of the ship Serenity tries to evade an assassin sent to recapture one of their number who is telepathic.

American Humane’s role
American Humane’s Film & Television Unit monitored this film. Serenity is a Screen Actors Guild (SAG) production, and therefore it was required to provide American Humane’s Certified Animal Safety Representatives on-set access whenever animals were used. During pre-production of the film, American Humane’s Film & TV Unit received a copy of the script and the daily call sheets. American Humane’s Animal Safety Representatives carefully reviewed these materials to determine whether any scenes or situations appeared to put animals at risk. American Humane’s Certified Animal Safety Representatives were then on the set to ensure the animals remained safe throughout production.
This film met the Guidelines established by American Humane, received the Monitored Acceptable rating, and was awarded the ""No Animals Were Harmed”® End Credit Disclaimer.
Featured Animal Scenes
As the crew exits the ship for a night on the town, they pass through a marketplace that has some animals in cages. An iguana in the foreground is the most visible animal in the sequence; other caged critters include birds, chickens and turtles. A dog is also briefly seen walking around the market. Trainers supplied and maintained the cages and their inhabitants. All cages were securely placed and trainers stood off camera to retrieve the animals when filming was completed. The dog was placed on mark by one trainer and then called off screen by another handler waiting with a treat.
One brief scene contains a close-up of two goldfish swimming in a bowl. These fish were purchased at a pet store and maintained by a crew member, who adopted them as personal pets afterward.