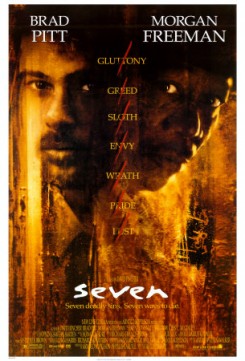 Seven is a psychological thriller about a series of murders that take place involving the seven deadly sins, gluttony, greed, sloth, lust, pride, envy and wrath. Mills and Somerset are the detectives assigned to the case. Mills is a young detective with the idea that he can make a difference in the world, while Somerset is seven days from retirement and just wants to show him the ropes before getting out. But when the murders start to make a pattern involving the seven deadly sins, Somerset decides to stay on the case until it is finished. The murders are bizarre and the killer leaves clues at every murder site but he is always one step ahead of the detectives. Somerset has an idea, through a contact at the FBI he gets a list of people from their files that check out books on medieval times or anything involving the seven deadly sins. Through this list they track down a man named John Doe. As they arrive at his door, he is coming up the steps. Upon seeing the detectives, he starts to shoot at them and they pursue the man, almost catching him. They find many things in his apartment connecting him to the murders such as pictures of the victims and pieces of their anatomy. Thus begins the process of putting the pieces of the puzzle together in an attempt to catch this insane psychopath before he kills his next victim.

In one scene Mills brings Somerset home to meet his wife, Tracy. Mills immediately goes into the other room to play with his dogs. Somerset and Tracy watch through French doors as he sits on the floor playing with the dogs. The dogs belonged to the actor. He was merely playing with them as he often does. When Somerset and Mills go to the first "sins" murder, the body is that of an obese man that has been tied to his chair and force feed until his stomach explodes. There are cockroaches swarming on the floor amongst the food and expelled body fluids. To keep the cockroaches from escaping, thus protecting them, a perimeter two by fours was built around the area where they would be shooting the scene involving the roaches. Vaseline was applied in large amounts to all visible cracks and the surface of the perimeter. All of the cockroaches were accounted for at the end of the scene. In chasing the murderer through his apartment building, Mills runs out of the building onto an air shaft. This disturbs some pigeons that were sitting on the shaft. Some of them fly off while others move out of his way staying on the shaft. Both wild and tame pigeons were used in this scene. The ones that flew off were the wild pigeons. The ones that were tame merely stayed on the air shaft. There is a scene where the detectives are driving John to the site of the last victim's murder when they see a dog dead in the road. The dog used was a taxidermic dog.