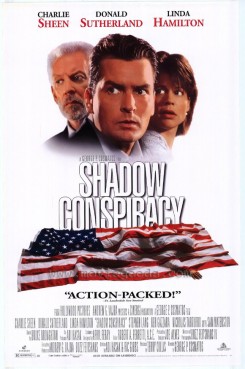 Shadow Conspiracy is a political thriller in which a congressman uncovers a plot to assassinate the President. Congressman Bobby Bishop is contacted by a professor from the Center of Civic Responsibility, only to have the man die in his arms. Bishop now begins unraveling the threads of a conspiracy which he traces to the White House inner circle. His only ally is a reporter who is not only an adversary, but also his ex-lover. Together they run for their lives from the professional assassin who is slaughtering everyone in pursuit of the truth. His mission is to kill the President of the United States.

The only animals seen in the film are a litter of four small puppies in the opening sequence. When the hit man enters the Center for Civic Responsibility, he calmly and coldly begins to execute all of the professors working there. One escapes, only because the killer is distracted by a basket of puppies on the floor next to one of the bodies. The killer picks up one of the puppies and holds it in one hand as he strokes it with the silencer attached to the barrel of the gun which he holds in his other hand. He then tosses the pup back into the basket and walks away to search the rest of the building. The scene was shot in cuts. There is an establishing shot in which we see the four puppies in a basket on the floor. When we see the killer kneel down and pick up one of the puppies, his body obscures the basket. Then he tosses the pup into what we believe is the basket containing the additional puppies, he is actually tossing only one puppy onto a soft cushioned area from which the other pups had been removed. During the gunfire, only quarter loads were used and the puppies wore custom fitted foam ear plugs. American Humane was unable to be present on set when the puppies were working. However, AHA conferred with the production company and trainer before and during filming and believe that AHA guidelines were followed.