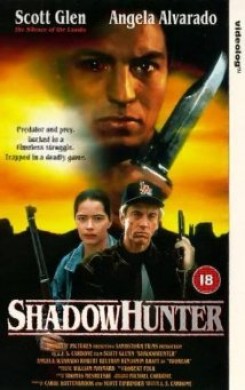 LAPD detective John Cain is going through a bad time. His dedication to his work has wrecked his personal life and his wife has left him. He's facing serious burn-out, so, for a change of scene, his superior officer sends him to Arizona to pick up an Indian accused of a brutal murder and drive the man back to LA to stand trial. When he arrives at the remote desert location to claim Twobear, his prisoner, he is warned to be extremely cautious. Twobear has killed several people and was skinning one of them when he was caught. Cain secures the evil-eyed Twobear into the caged rear seat area and begins his uneasy desolate drive back to LA. Something about Twobear's presence unnerves Cain and he has an accident when he swerves to avoid hitting an Indian, looking strangely like Twobear, who appears suddenly in the road. While Cain is unconscious, Twobear escapes with his gun and shield and before long kills an innocent elderly couple. Cain organizes a search team to hunt Twobear on horseback. Twobear knows the area as he was raised there, so an expert tracker is enlisted. She is Ray Whitesinger, a beautiful Navajo Indian who has a degree in criminology. She has a special interest in finding Twobear as he killed her father. As the hunt continues Cain and Ray split from the rest of the team and a romance develops. What follows is a suspenseful cat and mouse game where the pursuers become the pursuees. The story is punctuated with mysticism, violence and strong language.

As the search party assembles, one horse can be seen whinnying and rearing in reaction to a helicopter landing nearby. A trained rearing horse was used and, rather then reacting to the helicopter, the horse was responding to his rider's cues. The trackers ride over a variety of terrain. All areas were inspected prior to filming for potential hazards to the horses. The horses were not permitted to run too hard nor get overheated. After Ray and Cain have split from the rest of the search party, Twobear ambushes them while they are in a stream, and Ray's horse is shot and falls on top of her, holding her down under the water. Cain's horse is also shot and falls. After Cain succeeds in freeing Ray, she sees her wounded horse lying in the water with his head raised up. She must shoot the animal to put him out of his misery. She raises her rifle and shoots the horse. This extremely dramatic scene was shot in cuts. They are all shown very quickly on screen. To break it down, several horses were used to do the various stunts. Stunt doubles were interspersed with the actors for various parts of the scene. The horse standing in water was given a cue by its rider to rear. As the horse reared, the rider fell off. This was a trained rearing horse, and after the scene was filmed the horse was dried off with a blanket and placed in the warm sun to dry. For the spectacular horse fall in the water, a specialty horse named Twister was brought in. Twister is known for his famous falls in which he rears ad twists before falling. The water was not deep in order to allow the horse to get a firm footing. The horse was in the water for just a short period of time and afterwards was dried off, blanketed and walked in the sunshine. For the underwater shots, where the horse is lying in the water, a trained falling horse was used and the water was about six inches deep. The horse laid in the water while the camera man got his shot. Our AHA representative advised the cameraman that they would have to get the shot fast as they were going to be permitted to do this one time only. The horse fell easily and the wrangler held the horse down by the reins. The horse laid in the water for about thirty seconds. Our representative also had them put cotton in the horse's ears to keep water out of the horse's ears. The horse had been trained to lie still on the ground with pressure on the reins. After the shot the horse was dried off, a blanket placed on him and he was walked in the sunshine. The balance of the scene was accomplished with the skillful use of plastic horse parts in extreme close up, such as when squibs hit the horse to show injury to the horse. When Ray shoots her horse, the horse is not on camera for the actual shooting, so we don't see it. All of the action with the real horses was accomplished through training and preparation and no horses were tranquilized nor sedated in any way and none were injured. When all the edits and pieces of the filming were put together in the editing room it made for an extremely spectacular and effective scene. A coyote is seen at various times either observing or trailing Twobear. In the suspenseful climax when Cain is dangling from the edge of a cliff he looks up and suddenly Twobear has turned into a coyote and is snarling at him from the edge of the cliff. The coyote was filmed separately and its' primary action was to walk from A to B and a close-up shot was filmed of the coyote growling in response to his trainer's verbal command. There is a scene in which Twobear holds Ray captive and suspends her above a room in an old cliff dwelling in which he has released rattlesnakes on the floor. The snakes were handled by a professional wrangler and they had no specific action other than to be there. A professional wrangler was used for the tarantula and scorpions which were filmed in two different scenes primarily as atmosphere.