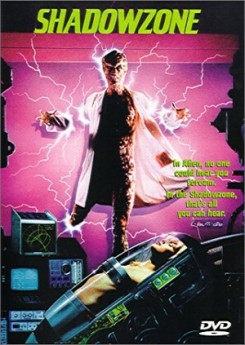 Shadowzone is a gory science fiction thriller that takes place deep underneath the Nevada desert where a government experiment is being conducted. During an experiment to test the use of deep sleep in future space flight, a man dies and Captain Hickock is sent by NASA to investigate. He finds an odd assortment of humans and animals occupying the dilapidated subterranean laboratory. One is Bingo, a monkey and former lab animal, who is now a pet and wanders at will through the catacombs. When Hickock requests a duplication of the experiment, the participant enters into a strange dimension and a highly intelligent monster from another dimension is unleashed accidentally. They are all trapped as the monster proceeds to stalk and destroy all who inhabit the laboratory.