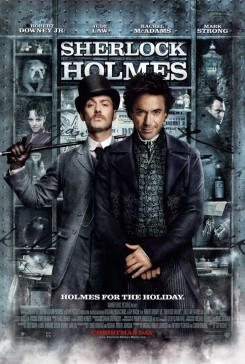 Detective Sherlock Holmes and his stalwart partner Watson engage in a battle of wits and brawn with a nemesis whose plot is a threat to all of England.

Sherlock Holmes has a pet bulldog named Gladstone who performs such mild action as lying or sitting on the floor, being petted or briefly walking across the room. For this action, trainers placed the dog on its mark and cued it to perform the action, rewarding it right after. The actors who interacted with the dog were instructed on its proper handling before filming began.
American Humane Certified Animal Safety Representatives™ were unable to directly supervise all of the animal action in Sherlock Holmes because some of the animal action was filmed outside the U.S. and the production did not establish a contract for our oversight. American Humane did not monitor some of the dog action or any of the horse, camel, bird, fly and maggot action.