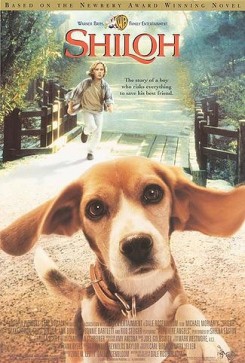 Shilo: A Dog's Story is about Marty, an eleven year old boy who befriends, Shilo, a dog, when the dog's owner, Judd, abuses him.

In one scene, Judd is seen in the woods with Shilo and three other dogs on leashes. Judd is seen pointing a gun at a raccoon sitting in a tree. A gunshot is heard and later the raccoon is seen dead on the ground. When Shilo hesitates to retrieve the raccoon, Judd supposedly kicks him in the butt. Shilo runs towards the raccoon and licks it. Judd hits Shilo with the butt of his gun which prompts the dog to run off. Judd proceeds to point his gun at Shilo and shoot. This scene was shot in cuts. When the four dogs are seen walking into the words, the trainers placed the dogs with the actor and then cued the animals as the actor walked into the frame. To accomplish the shot of the raccoon in the tree, trainer #1 released the raccoon into the tree while trainer #2 cued him with food and a flashlight to stay on his mark. Flash-paper was used in the gun to simulate the effect of a gunshot. At completion of the shot, trainer #1 called the raccoon back to his crate and fed him. When Shilo is seen licking the raccoon, the trainer placed food on a fake raccoon and the dog merely licked it off. All shots of the dog supposedly being kicked or hit with a gun were simulated with the trainer doubling for the actor. A rubber gun was used and the dog was trained to scoot when the trainer kicked the ground behind him.

When Marty sees Shilo for the first time, the dog has a cut over his eye. Shilo licks Marty's face and the boy picks him up, walking A to B. Trainer #1 released the dog to his mark while trainer #2 cued him to stay, bark, and move towards the actor. When the shot was completed, trainer #1 cued the dog with a verbal command to walk towards him, out camera range. Vaseline was placed on the dogs fur and then fake blood was applied over it.

The first time Shilo is returned to Judd he is seen kicking at the dog and the animal is heard yelping. Again, the trainer doubled as the actor and simulated kicking the dog. The yelping was inserted in post production.

Later when Marty is hiding Shilo in an abandoned shed, he supposedly gets into a fight with a neighbor's dog. It is at night and the actual fighting is not seen. The neighbor dog paws at the door to the shed, knocking the slats down. The scene was shot in cuts. The dogs were actually play fighting. When the dog is seen pawing at the door, trainer #1 placed the dog on his mark while trainer #2, inside the shed, cued him to paw at the door. All of the sounds of the dogs fighting were inserted during post-production. The blood seen on Shilo was non-toxic fake blood applied as described earlier.

There are several scenes where Shilo is seen walking from A to B outside and inside Marty's house. He is seen lying on the floor, on a chair, under Marty's house, lying on a table when the doctor is checking his wounds, riding in a truck, and sitting in a dog pen. For all of these scenes the trainer placed the dog on his mark and cued him with verbal and hand signals. When the dog is seen in the shed, the trainer was present out of camera range using hand or verbal commands to cue him.

Other animal action consists of dogs tied up or in dog runs outside Judd's house, a fox seen in the woods, and a rabbit seen in a cage before Marty releases it. For the shot of the fox, trainer #1 released the fox from a crate off camera while trainer #2 cued the fox to a log. Trainer #3 buzzed the fox back into the crate. When Marty releases the rabbit, the trainer placed the rabbit in the cage with a safety fence around the area. As the actor opens the makeshift trap, the trainer, off camera, blows air on the rabbit to make him move in the proper direction. Another trainer was waiting and caught him.

American Humane was present on set to monitor the animal action. We are rating Shilo: A Dog's Story "Acceptable".