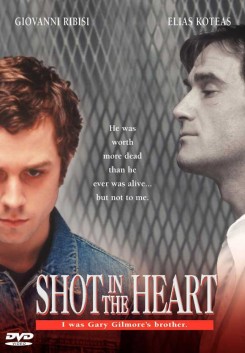 Shot In the Heart

Based on the tragic true story of a troubled family torn apart by alcoholism, child abuse, and murder, Shot in the Heart features Giovanni Ribisi as Mikal Gilmore, brother of convicted murderer Gary Gilmore (Elias Koteas). After his conviction in 1977, Gary makes an unusual plea by requesting the death penalty, forcing Mikal to come to terms with his brother's fatal decision and the painful details of his family's demise.

An Omen During the opening credits, the ghostly, faded image of a white horse running in the background adds an ominous flavor to the introduction. Soon, it is revealed that the presence of the white horse is an omen, a warning that someone will soon die. To achieve the ethereal effect, the animal trainer walked a white horse from point A to point B in front of a green screen; the special effects team later added the haunting backdrop. Later, a man on a horse speeds by pulling a makeshift sled carrying children. Unsuspecting chickens scurry out of the way of the oncoming group and a concerned dog barks and runs alongside as the sled careens and crashes. Three different horses were alternated in this carefully coordinated sequence. The specially designed sled that was attached to the horse's gear had plastic runners installed to ensure easy-pulling. In addition, the horse got plenty of rest between takes and was not attached to the sled when it crashed. Trainers and an AHA representative also ensured that the 11 chickens and dog in the background were always a safe distance from the choreographed commotion.