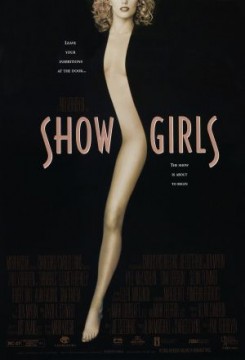 Nomi Malone, a girl of nineteen, suitcase in hand, hitches a ride to Las Vegas where she plans on becoming a dancer. She would seem to have traditional moral values intact, and does not hesitate to brandish a switchblade knife to insure those values as Jeff, the truck driver who picks her up, finds out. After Jeff ditches her in a casino, taking her suitcase with him, she vents her anger on a car in the parking lot of The Riviera Hotel and in doing so, meets the driver, a black girl named Molly. It doesn't take much coaxing for Molly to find out Nomi's story and offer to let her move into her trailer until she gets a job. Six weeks later, Nomi is introduced to Molly's workplace at the MGM Stardust where Molly works as a seamstress for the showgirls. The star of the show, Cristal, makes fun of Nomi when Molly introduces her as a dancer. After questioning, Nomi reveals that she is a dancer at "Cheetah's", a strip joint known by Cristal. Nomi storms out and she and Molly go to a disco where she meets and dances with a black man who says he could teach her to be a "good" dancer. A fight breaks out at the club and Nomi lands in jail. Her dance partner, James Smith, bails her out of jail. Back at the "Cheetah", Nomi and the dancers prepare themselves for the evening performance as Al, the owner, makes his appearance introducing Hope, a wide-eyed newcomer. The show begins and we see a lot of nude women, including Nomi, doing provocative dancing. Cristal appears in the audience after the show and, via a messenger, offers $500 for Nomi to "lap dance" with her hunk, Zack. Nomi "lap dances" with Zack while Cristal watches. A representative from the MGM Sands approaches Nomi and she auditions for the chorus at the hotel. Cristal has been behind this in an effort to corrupt and/or humiliate Nomi. The manager offends Nomi by asking if she wants ice on her nipples because she needs to look like she is having "fun." She storms off , gets a ride with Zack and goes to bed with him at his apartment. He then gets her the job at the MGM. In her Versace dress that she has purchased with the $500, she appears for her first show at the MGM and we see her in the dressing room making up for what she perceives as "the big time," where there will be no such thing as "lap dancing." Nomi's moral values slowly erode as she attends a party as a representative of the MGM Sands Hotel. It becomes clear that the finale is to be an orgy with valued Japanese customers. She mistakenly thinks Zack is unaware of the seamy side of this business. Of course, he is very aware of it and promotes it. Cristal becomes jealous of Nomi's affair with Zack and makes it difficult for Nomi to dance on stage. In a confrontation after the show, Nomi pushes Cristal down the backstage stairs. She denies it when confronted, but is backed up by another girl, who also dislikes Cristal. However, Molly has seen it and knows the truth. Since Cristal has a broken hip, Nomi becomes the star of the show and a large party is given for her. Nomi convinces Molly to go to the bash because her rock 'n' roll idol, Andrew Carver, will be there. Nomi makes sure Molly meets him. They neck and as it gets heavier, go to his room where two men join him to "party" with Molly as the prize. Molly gets free and is later spotted by Nomi and taken to a hospital. It is there that she discovers Zack does not intend to call the police, but instead wants to make amends by setting Molly up in a dress shop. When Nomi attempts to call the police, Zack threatens to expose her history as a prostitute. Nomi quickly calls Andrew and goes over to his hotel "dressed to kill" in the Versace dress. The two men, who had joined Andrew in raping Molly, are guarding his door and gladly let her in. She seduces Andrew and when he is in an awkward reclining position, brings out her switchblade knife and tells him not to make a sound if he wants to live. She kicks him unconscious. As she leaves, the guards assume they have finished having sex.. In an effort to re-establish her values, Nomi goes to the hospital to see Cristal and apologize. She then goes to the highway and hitchhikes a ride. A truck driver picks her up. When she takes off her large sunglasses the driver screams, "Oh, no, not you." Yes, it is Jeff, the truckdriver who initially brought her to Las Vegas. She flips out her switchblade and says, "Where's my suitcase." She has come full cycle.

Four monkeys were used in one scene in the dressing room of The MGM Stardust. As the showgirls prepare for their performance, four monkeys come in. They jump up and down on the floor. The monkeys merely followed the cues of their trainer. One monkey jumps up onto the makeup counter of the dressing table, throwing on some cold-cream and lipstick. To accomplish this, the trainer placed the monkey on the counter top and cued him to put on the cold cream and lipstick.