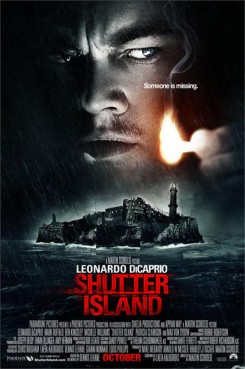 Drama set in 1954, U.S. Marshal Teddy Daniels is investigating the disappearance of a murderess who escaped from a hospital for the criminally insane and is presumed to be hiding nearby.

Rats
While searching for a body, Teddy (Leonardo DiCaprio) climbs down a cliff by the ocean. He comes across several rats crawling on the cliff. Teddy stomps on some rats and kicks or swats others into the ocean as he climbs. This scene was filmed on an enclosed set and only necessary cast and crew members were allowed on the set. The rocks were fake and the “ocean” consisted of large pools with wave and wind machines. As a precaution, the pool drains and all holes in the set were covered with mesh so the rats could not accidentally fall into them.
The American Humane Certified Animal Safety Representative™
and the trainers supervised the rehearsals to make any adjustments before bringing the rats in. A crew member with a hose wet down the set and all catch boxes used to retrieve rats were covered with plastic bags to keep them dry. Furniture pads were placed all over the ground to serve as a soft landing in case the rats fell, which none did.
The rats were allowed lots of rehearsal time on the set with the wind and wave machines on to get comfortable with everything. A heated trailer sat nearby for the rats to go in if they got wet. Rats were changed out often so that they would not stay cool and damp for long.
Several trainers surrounded the set near the catch boxes and used buzzers to help guide the rats in various directions. Two sets of rats were used for these scenes. Eighty-five rats were really good at running or scurrying and 75 were more sedentary. Different rats were filmed for different parts of the scene, but all were accustomed to being together and all were rested between takes. Trainers stood nearby with nets to catch wandering rats.
The actor was instructed on the handling of the rats and how to walk safely around them. All his steps were very well-choreographed. He was also instructed on how to gently brush the rats with his hands or feet. A stuffed prop rat was used for the shots in which he kicks or stomps on a rat.
Ducks
Dolores (Michelle Williams) swings on a dock and a couple of ducks swim by. These ducks were coincidentally caught on film in their natural environment.