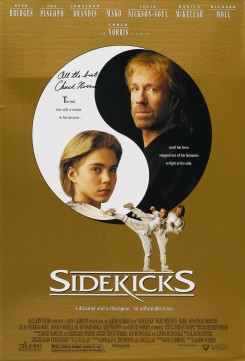 Sidekicks is a story that is slightly similar to that of the Karate Kid. It portrays the story of Barry Gabruski, a slight boy with an asthma problem, and very few friends. Try as he may, he cannot stop himself from daydreaming. He does this quite frequently, no matter where he may be. He imagines himself as Chuck Norris's right hand man, and together they save the day, in all sorts of situations. One day, after being accosted by the school bully, Barry's father decides to let Barry learn Marshall arts. Miss Chen, Barry's history teacher, arranges to have her Uncle, Mr. Lee, become Barry's teacher. Barry works very hard and becomes quite proficient. Then his big chance finally arrives. There is to be a karate championship match held where he will get to compete as a team with Miss Chen and Mr. Lee against the karate school team that Barry's adversary attends. When Mr. Lee and Miss Chen go to sign up, they are informed that it must be a four man team, not three. They are beside themselves, as they know that Barry will be crushed. Mr. Lee notices that Chuck Norris is there to observe the meet and comes up with a brilliant idea. He has his niece ask Mr. Norris if he would be their fourth team member. Chuck agrees and Barry's daydreams are about to come true.

Animal action is mild and minimal. Animal scenes entail a man riding a horse as background in one scene, a tortoise walking in his area at the zoo as atmosphere, a snake slithering through the grass and a Doberman being walked on a leash.