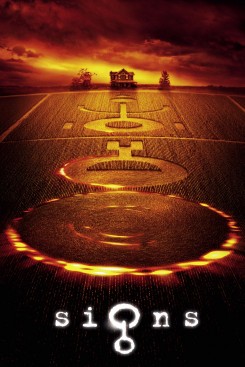 Mel Gibson is Graham Hess, a rural Pennsylvania farmer who discovers mysterious crop circles on his land. The signs spread, further disrupting the lives of Graham, his two children, played by Rory Culkin and Abigail Breslin, and his brother Merrill (Joaquin Phoenix).

"The Film and TV Unit of the American Humane Association (AHA) monitored the action sequences involving animals. The AHA has sole authority, through a contract with the Screen Actors Guild, to protect animals used in film and television. Inspectors reviewed the script and action scenes before and during filming to ensure that animals were not harmed or mistreated and that AHA Guidelines for the Safe Use of Animals in Filmed Media were upheld. They also monitor conditions in which animals were housed during production. Houdini and Isabelle
Graham’s two German Shepherds, Houdini and Isabelle, wander around the center of a crop circle, barking incessantly. Several German Shepherds shared the canine roles, with Josh, Zorro, and Thor playing Houdini and the part of Isabelle going to Betty, Xira, and Lacey. For this scene, trainers placed two thin wire leads onto the dogs’ leashes and held onto them from inside the corn field as the dogs wandered around the crop circle. The camouflaged trainers also verbally cued the dogs to bark from their hidden location.
Houdini the dog lies on the kitchen floor next to a puddle. The two children lead him outside. Trainers placed the dog on a hard “stay” command, which they reinforced with hand signals from off-camera. A trainer called to the dog to come to her, and the kids held onto his collar as he exited the camera frame. The puddle was a mixture of coca-cola and water.
The two dogs sit outside of the house. One of the children places a bowl of water in front of Houdini and he growls furiously. The kids stand up, afraid, as the dog continues to growl. The dog and children were filmed separately for this sequence. The dog was placed in front of a green screen while his trainer stood directly in front of him, where the child would later be superimposed during post production. The trainer cued the dog to growl from his close position and held the dog’s eyeline with hand signals. Although not used in the final cut of the film, the trainer also cued the dog to lunge using an attack arm (a padded prosthesis that the dog was trained to attack).
Houdini lies dead on the ground with a large fork through his neck. A taxidermied prop dog was used for this sequence in addition to a live animal. Trainers applied fake blood to the dog and cued him to “stay” from off-camera. The fork was actually stuck into the ground next to the dog.
Isabelle stands barking, tied to the outside of the house. Graham brings her a bowl of food, but she ignores it and continues to bark. A trainer gently tied the dog to the house with a rope. As the actor approaches the dog with the bowl of food, the trainer cues the dog to bark and strain against her rope from off-camera. Birds
Swarms of birds fly overhead. This was filmed naturally on location.