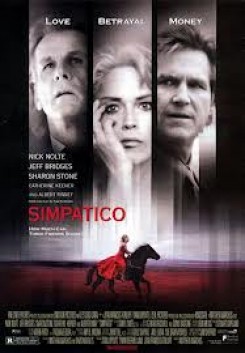 The Kentucky horse-racing culture and a complicated love triangle are explored in Simpatico. It is the tale of an earlier shady racing scam that resurfaces to effect the assorted lives of its perpetrators and victims.

There are several scenes of horse racing events. When actors are seen interacting with horses, the horses were supplied by a professional trainer. The scenes depicting the race were a combination of staged events and stock footage of horse racing. In a very dramatic scene, the horse, Simpatico, is killed. For this a trained rearing and falling horse was used. The horse was cued by trainer to rear up, fall on his side and then lower his head to the ground. The horse was also trained to lie very still in a lay down position. When edited with the sound effects laid in, the scene is a frightening simulation of a horse being killed. AHA monitored the animal action. An accident occurred that resulted in a horse being euthanized. AHA investigated and determined that no cruelty occurred. However, the film bares an unauthorized end credit disclaimer that was not officially issued by AHA. We are rating the film Questionable.