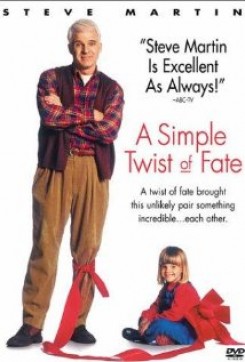 Simple Twist of Fate, A

Michael McCann is a music teacher for a private school. He and his wife are expecting their first child, and he fantasizes about what he will do with his son as he grows. He'll teach him to play baseball, shoot baskets with him, and other sports. However, prior to the child being born, his wife comes to him with the news that not only is the baby going to be a girl, but also that it's not his.

The movie cuts to five years later. McCann is living in another small town in Virginia. For the most part, he is a loner.. The little pleasure he has is in counting all the gold coins he has collected since he started saving the first one which was to have been for his son. He has a ritual he goes through each time he views his collection. First he counts it, then he fondles it and then he lines up three shot glasses of vodka and gulps them down.

In the meantime, we cut to a polo match, where John Newland, a politician running for governor, plays with the"upper crust". John's brother, Tanny is the black sheep of the family. He spends a lot of money and cavorts with a shady bunch of characters. Tanny learns that his brother John had an affair with Daisy, a heroin addict, who now has his child. Tanny blackmails John for money to give to Daisy, who cannot afford to care for her daughter.

One night Michael has had to much to drink and passes out at home. Tanny, also extremely drunk, happens by his house and robs Michael of all of his treasured gold coins. The next day, Michael is not only hung over, but devastated when he discovers the robbery. Tanny, in the meantime has driven out of town and has a horrible accident. We see him wondering off in the fog near the rock quarry. The police know that Tanny is the one who stole the coins, but he is never found.

After Daisy finds that her meal ticket is missing, she has no choice but to walk miles through a snowstorm to her daughter's father, who is celebrating his victory as governor with his many friends and constituents. When Daisy arrives, she is not allowed into the mansion and John vehemently denies any knowledge of Daisy and her baby. She walks back into the snow storm with her daughter and stops behind Michael's house. While Michael is outside, collecting wood, Daisy sneaks into his house and puts Mathilda, her daughter, on Michaels bed and leaves. She doesn't get far, however, and is later discovered frozen to death in the snow.

After attempting to locate Mathilda's family, Michael feels that perhaps fate sent her to him in lieu of the gold that was stolen from him, and he attempts to adopt her. Years pass and Governor John Newland and his wife learn that she can not bear children. It is after this news that the Governor attempts to get to know his daughter Mathilda. He gives her a pony and a standing invitation to visit the mansion at any time. Michael fears that he may lose her and wages a custody battle for her.

The animal action is mild. During the polo match, the horses were ridden by experienced riders and no stunts were performed. In another scene, Michael is purchasing a puppy for Mathilda. So that the puppy would look exactly like its mother, the trainer applied a white rabbit fur toupee onto the puppy's head. The toupee was applied with Guafquat, a mild adhesive, which is used for humans as well. The adhesive allowed the toupee to be removed easily, and caused no pain to the puppy. In another scene, Michael watches as the now supposedly adult dog tries to squeeze through the dog door. Actually, upon his trainer's verbal commands, the dog merely put his head and front paws in the dog doorway, and never attempted to go through it.

In the forest, Mathilda and her friends give a funeral for a mouse. They carry it in a pizza box for burial. The mouse is never seen and, in reality, there was no mouse inthe box.