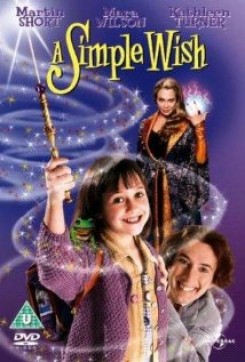 A Simple Wish is a film about Anabel, a little girl, who wishes that her father would acquire the acting job of is dreams so the family wouldn't have to move. When Anabel's fairy-godmother appears to grant her wish, "he" is nothing like she expected. As a matter of fact, he has only been a fairy less than a year and most of his spells end in chaos.

Oliver, Anabel's father, is a carriage driver in New York City. There are several scenes where Oliver and other carriage drivers are seen driving their horses and carriages through central park and surrounding streets. Experienced carriage drivers were used for all of these scenes.

In a scene at Central Park, Anabel and Murray are sitting on a rock at the seal exhibit and the seals are tossing fish at her. The seals were tossing dead fish purchased by the production company.

There is a scene where a black cat is in the street and Oliver gets down from the carriage to see what is causing Dutches, Oliver's horse, such concern. Duchess, seeing the cat, rears up and takes off down the street. Oliver grabs a bicycle and peddles off in hot pursuit. This scene was shot in cuts. A trained rearing horse was used. The trainer, hidden behind a curtain, had complete control of the horse and reins.

In another scene, Murray and Anabel are on the other side of the park when they spot Oliver and Dutches. Murray proceeds to cast his spell and the wind starts blowing, scaring Dutches, who rears. Murray's spell goes wrong and Oliver is turned into a statue and Dutches into a mouse, with a saddle attached. Anabel's brother, Charles, grabs his backpack, and puts the mouse inside. Meanwhile, some pigeons fly up to the statue and land on Oliver's head. This scene was shot in cuts. A trained rearing horse was used. The mouse was accomplished by using computer graphics.

In another scene, Dutches, as a mouse, is seen running from a cat and into a dumpster. The cat runs towards the dumpster, jumping on top of it. In the meantime, Murray has reversed the spell and Dutches turns back into a horse, busting out of the dumpster and rearing. This scene was shot in cuts. The cat was filmed separately before a blue screen and the shot was inserted with the background during post-production. The horse was a trained rearing horse. Again, as in earlier scenes, the fake mouse was accomplished with computer graphics.

Other animal action consists of a dog seen walking A to B on a leash. There is also a scene where fake frogs are seen jumping out of an actor's mouth and onto a stage.