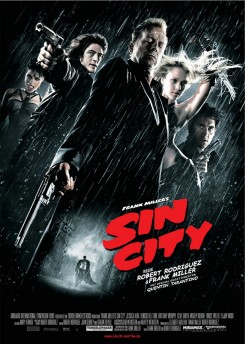 A film that explores the dark and miserable town, Basin City, and tells the story of three different people, all caught up in violent corruption.

American Humane’s role
American Humane’s Film & Television Unit monitored this film. Sin City is a Screen Actors Guild (SAG) production, and therefore it was required to provide American Humane’s Certified Animal Safety Representatives on-set access whenever animals were used. During pre-production of the film, American Humane’s Film & TV Unit received a copy of the script and the daily call sheets. American Humane’s Animal Safety Representatives carefully reviewed these materials to determine whether any scenes or situations appeared to put animals at risk. Animal Safety Representatives were then on the set to ensure the animals remained safe throughout production.
This film met the Guidelines established by American Humane, received the Monitored Acceptable rating, and was awarded the ""No Animals Were Harmed”® End Credit Disclaimer.
Featured animal scene
Three grey and black male Malamutes were on call to play the part of the dog “Wolf.” For the scene in which the dog appears to eat one of the actors, this action was actually filmed against a green screen, and the actor was replaced by a dummy. The trainer placed a rubber band on the dog’s top teeth to make it appear as though the dog was snarling. To entice Wolf to eat, the trainer placed some meat on a block of wood and bolted it near the dummy. To best control the dog while it chowed down on the meat, the trainer stood just off camera and held the dog by its “waist tie.” Only necessary crew members were present on the set during this scene.