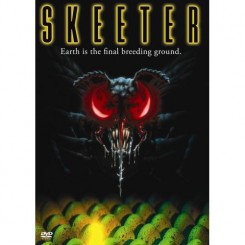 Skeeter is the story of killer mutant mosquitoes that ravage the small town of Clear Sky. People and animals have been mysteriously dying in growing numbers recently in Clear Sky, with no one having a clue as to why. Deputy Roy Boone has his suspicions though. He suspects that it has something to do with the seedy Mr. Drake who has been trying to force all of the locals to sell their property to him for a large development project that he has underway. Together with Sarah Lindsey, Boone's childhood sweetheart, and Deputy Tucker, Boone's co-worker, Boone uncovers something that no one was prepared for. Drake's construction company has been dumping toxic chemicals into the town's water supply, which is bad enough in itself, but it has also created a huge, mutated form of mosquito that is relentlessly blood thirsty. We watch as this threesome tries to save the town from complete annihilation from the killer mosquitoes, as well as the crooked Mr. Drake and the untrustworthy Sheriff.

All animal action in mild. No live mosquitoes were used for this production. All of the mosquitoes were created with special effects and animatronics. There is one scene in which Boone and another Deputy, Tucker, come across some dead cattle lying beside a contaminated pond. They converse between themselves about the dead animals, but the only time we see the animals is in one shot of what is supposed to be the back of one of the dead cows. This was a prop made for this production and was obviously a fake. Other animal action includes Sarah riding her horse and a dog walking across the street.