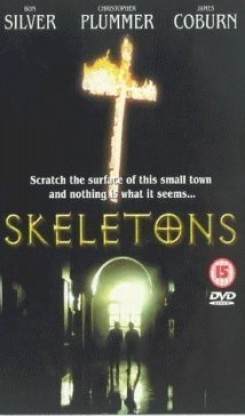 Skeletons is a film about a family who moves to a small town, Saugatuck Maine, to get away from the stress of city life. However, what they find there is much more chilling than anything they would encounter in the city.

In one scene a deer is seen in the woods drinking some water, when a few hunters from town appear, one of the men shoots the deer, killing him. This scene was shot in cuts. A real and a fake deer were used. The real deer was used when he is seen in the woods getting a drink. A prosthetic deer is used for the segment of the deer being shot and the portion of the scene where the deer's head is seen lying on the ground. Other animal action consists of a dog in several scenes being walked from A to B on a leash.