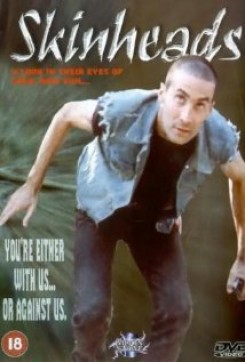 The story id about a group of far-right, new-Nazi, racist bullies who pursue several college students through the wilderness because the students are witness to murder. The bullies are called "Skinheads" because they shave their heads as part of their ritual. After robbing a "mom and pop" market and shooting the owner, the skinheads leave town on their motorcycles. They stop at Martha's Restaurant and gas Station, located along a lonely stretch of road. When they enter the restaurant they spot a racially-mixed group of Berkley students eating together at a table. They pick a fight which quickly escalates into rape and murder. Several of the students escape on foot, but are pursued through mountainous terrain by the skinheads. There are several more bloody and violent encounters before the skinheads get their due. A snake and a bear are instruments through which two of the skinheads meet their demise.

A bear appears where two students are sleeping in the forest. One student waves him off. The bear appears again later, and we are given the impression that he has mauled and killed a skinhead, but we never see the actual mauling. In another scene a snake strikes and kills one of the skinheads.