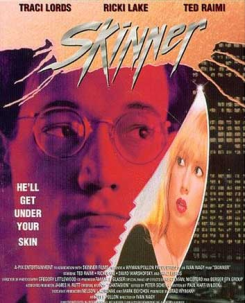 Skinner is a film about a disturbed individual named Dennis who stalks prostitutes, kills and skins them. He then sews their skin together so he can wear it when he kills his next victim. During the time of these killings, a victim of his that survived a previous attack five years earlier, is stalking him. Dennis had left her disfigured for life, and she is out to stop this terror.

The animal action in this film is minimal and involves one German Shepherd and a cockroach. There are two scenes where Dennis encounters a security guard and his dog. The first one is when Dennis meets the guard who is walking the dog on a leash. The second one is after Dennis has just killed one of his victims. Dennis is wearing the skin of his latest victim and the dog starts to growl upon smelling the blood. To distract the dog from himself Dennis pulls off the arm piece and throws it to the dog. The dog jumps up, catching the skin in his mouth. He then drops it to the ground and begins eating it. The scene was filmed in cuts. When the dog walks from one point to the other, the trainer merely placed the dog at point A and, using voice and hand commands, told the dog to come. To assist the dog when he jumps up to catch the skin, a platform was built. In catching the skin, the trainer merely told the dog to "take and hold it." When you see the dog eating what appears to be the skin, it is really salami and dog food that he is eating. A cockroach is also seen in a hotel where Dennis takes one of his victims.