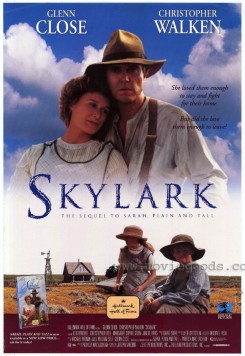 Skylark, based on the novel "Sarah, Plain and Tall", is a sentimental drama of a rural family's extreme hardships and the love that always comes through. Sarah, from Maine, has moved to the prairie and wed a man named Jacob. Jacob loves the land as much as he loves his two children and Sarah. The land is very harsh and there has been no rain in several months. Most all of their neighbors have been forced to pick up and move on due to the lack of water. Jacob will not go, but Sarah has her doubts about this desolate place. We watch as true love for one another and the love of the land bond this family into one that can never be torn apart.

Animal action is throughout in this period piece. Horses and cows are present in many atmosphere and background scenes. Jacob's family has a pet dog who is also seen throughout in minor action scenes barking, sleeping, walking with the family, riding in the wagon to town and being petted. In one scene heat lightening is striking all around the farm. The dog, who is sleeping outside, is startled by the lightening and gets up, running around in circles. There was actually no lightening. The lightening effect was added in post production. The dog followed hand and verbal commands given by his trainer, who was out of camera range, to lay, stay, get up and "chase the tail". The same lightening storm has also spooked the horses in the coral. Another lightening storm hits the area a few days later, but this time lightening ignites the dry shrubs surrounding the barn, and a tremendous fire begins. Jacob and Sarah race out of the house toward the barn in order to save the terrified animals that are trapped inside. Sarah gets the cow and calf out and leads them to safety. Jacob releases the horses from the stables and they bolt off into the night, away from the fire. Jacob must now rebuild his barn, and does so with the aid of his good friends and neighbors. Horses are hitched to the remaining burned out wall of the barn and urged forward until the wall tumbles. In another scene Jacob calls for Sarah to come out to the barn. When she arrives, she realizes that Jacob has called her so that she can aide him with the birth of a calf. The pregnant cow is lying on the floor of the stall with Jacob kneeling beside it. Sarah goes to Jacob and holds onto the mooing cow's head to control and comfort it. Within a few seconds Jacob pulls out a newborn calf and stands it up on it's shaky legs. The calf, after a little tumble to the ground, goes trembling to the new mother cow and begins to suckle. This scene was shot in several cuts. The cow does not actually give birth. A pregnant cow, due to calf in approximately four months was sedated by a veterinarian. We also see, in a later scene, Jacob pick up and put the calf in the back of a wagon. Sarah also has a pet cat she has brought along with her from Maine. The cat is seen being held, petted, eating, purring, sleeping, meowing and lying on the table. There is also talk of the cat becoming pregnant and, in a later scene, four kittens in a box are seen where a young girl picks up one of the kittens and caresses it. A coyote is seen drinking water at a watering hole in one scene. Chickens are also present in two background scenes. American Humane was on the set with additional on set supervision by the Helping Hands Humane Society of Kansas.