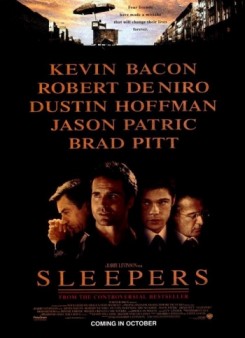 Sleepers is a film about a group of young boys who grow up in Hell's Kitchen on the lower east side of New York City during the mid-1960's. When a prank turns into the accidental murder of an innocent passerby, the four friends are sent to a juvenile reformatory in up-state New York. While there, they are exposed to the brutality of the guards and suffer torture, beatings and sexual abuse. Although the boys are no angels, the local priest, Father Bobby, knows that they are merely boys and the victims of their environment. He hopes that they are able to overcome the influences of their neighborhood and the reformatory. During the duration of their sentence in the reformatory, he is one of their sole visitors. However, they vow amongst themselves that they will never reveal the humiliation they have suffered to anyone, even Father Bobby. Years later, two of the boys have become local Hell's Kitchen hoodlums, the third is a newspaper man and the fourth is now a prosecuting attorney. Unexpectedly, the four of them get the opportunity of a lifetime. The two hoodlums encounter the guard who was the instigator of the brutality and abuse during their incarceration as he unwittingly eats a meal in a local Hell's Kitchen tavern. It may be possible to exact sweet revenge on all of the perpetrators. However, the key to their success lies with Father Bobby. It is the priest who must make a difficult decision that tests both justice and his faith, but ultimately may save the boys he was unable to help years before.

The animal action is limited to two scenes. In one we see a rat in the solitary confinement cell at the reformatory and in the other a horse drawn carriage is seen in central park. After one of the boys receives a brutal beating, he is thrown into a cell that is known as "the hole," or solitary confinement. We see him lying on the floor of the dark cell in a fetal position. A rat walks close to his body and continues on to another corner of the cell where light streams in from under the door. For this scene, the trainer placed the rat at point A near the body of the actor and placed a trail of scent extending to point B. When the cameras rolled, the rat followed the trail to the light of the doorway which was point B. Early in the film we see two of the young actors sitting on the back of a horse drawn carriage as it winds through Central Park. For the scene in the park, the film company used a professional hansom carriage and driver. Although American Humane was not on set for the filming of Sleepers, after conferring with the production company, we are rating the film "Believed Acceptable."