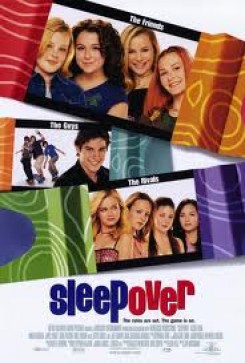 The summer before high school, Julie (Vega) and her best friends have a slumber party, during which they enter into a high-stakes scavenger hunt against the popular girls in school. The hijinks include everything from "borrowing" dad's car to having that all-important first kiss.

Chopper played the part of the family dog in this film. To achieve much of the animal's action, Chopper's trainer placed him on mark and stood off camera using a combination of verbal and visual cues.

In one scene, a boy tosses a wig to the floor and it lands on Chopper's head. This action was shot separately; one trainer put the dog on mark while another stood over Chopper and dropped the lightweight wig on his head.

Later, Ren and Chopper gaze at several recently delivered pizzas before running over to devour them. An after shot shows both boy and dog lying on the floor as they burp and pass gas. Strange as it sounds, according to the Animal Safety Representative on set, Chopper initially would not eat the pizza. But the quick-thinking trainers put some chicken in garlic sauce on the top—the dog's favorite meal—and he scarfed it down like a pro. A trainer stood off camera using verbal cues and hand signals to get the dog to run to the pizzas, eat them, and then lie down. Of course, the corporeal sound effects were added later!

In one scene, Chopper walks in high-heeled shoes and then kicks off one back pump. The trainer had the shoes adapted to fit the dog properly, and Chopper first practiced walking in similar shoes with low heels before mastering the high ones. Once the shoes were placed on the dog's feet, a trainer stood off camera using verbal commands and hand signals to get Chopper to walk in the pumps and kick one off.

In another scene, Julie jumps a skateboard over a Great Dane being walked on a leash. This took some practice on the dog's part. The trainer started by getting the dog comfortable with having a rider and skateboard near him. A professional stunt skater doubled as the actress for this scene, and the dog remained calm as the skater jumped over him.